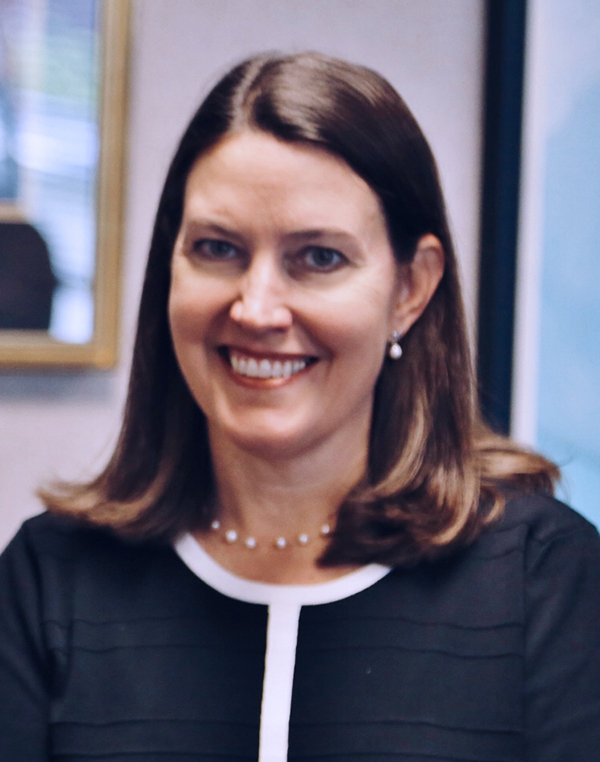 Can you tell us a little bit about your background?
I am from a big family with four siblings—there are five of us in total—and my dad was a pilot for Delta and my mom was a stay at home mom. Just a very traditional family. I grew up in the New Orleans area and went to Catholic school my whole life. Then I went to a big, somewhat impersonal college. It was a lot of fun, but I knew I wanted a smaller school for law school because I always knew I wanted to go to law school. I had a cousin who had attended Catholic Law School, and I went up to visit Catholic and I knew that’s where I wanted to go. So, that was my plan, and I never really veered from that. I graduated from LSU with a background in Business Administration with a Pre-Law emphasis and just headed up to Catholic.

How did you know you wanted to continue to pursue law?
I honestly always wanted to be a judge. One day my mother said, “Well you know you need to go to law school to be a judge.” And I knew then that I’d go to law school. When I was a little older and could understand it better, my uncle, who was a lawyer, encouraged me to pursue the Communications Law designation that you could get at Catholic. Once I got into law school though, I didn’t really find that area of the law very interesting and that wasn’t going to be the track to be a judge, which was always in the back of my mind when I made decisions along the way.

Can you discuss your early career development?
After my first year in law school, I was really confused about what I wanted to do. Then my Evidence professor, Lou Barracato, picked me to be in his Trial Ed. class the next year. I think he saw something in me that I didn’t really see in myself which was I could be a good trial lawyer. Once I got into his program, I just loved it. I just think I found my lane and I really enjoyed being in a courtroom. So, Lou changed the course of everything for me.

I think at a much larger law school I would have gone unnoticed and because of the sort of personal attention that the faculty paid to us, I am where I am. Catholic was the perfect choice for me and I do credit it with my success.

Are you where you expected to be at this stage of your career?
I honestly never expected to get a federal judgeship. I always thought I would get the state judgeship, and in fact, that was what I was trying to get before this opportunity came up. I was a finalist for a state judgeship when this position opened up and I actually withdrew my name and took a gamble. When I got it, it exceeded my expectations. At the time I got it, it was very rare for a Federal Public Defender to go directly from a Federal Defenders’ Office into a U.S. magistrate judge spot. In fact, I had been told, not to throw my name in, that they would never appoint a Federal Public Defender. Sometimes, I think you just have to shut out the noise and go for it because if you listen to what other people are saying, you might miss a really good opportunity. Also, this position wasn’t the first judgeship that I went for. I had gone for several at the state level, so I feel very lucky to have this position. I walk into my office every day and still pinch myself.

What were/are the most rewarding parts of your job? What were the biggest challenges?
Definitely naturalization ceremonies. In the ceremonies, you’re watching 65 to 85 people become citizens and it’s a super happy day in court. We like to say that it recharges our batteries as judges and reminds us of everything that’s good about the country—especially in a time that the country is so divided. To preside over one of these ceremonies is very emotional. To hear what they have gone through to become a citizen makes you realize that you sometimes take your own citizenship for granted.

There are also a lot of smaller, rewarding experiences that are less just visible. A “random” case may be very meaningful to me because of where the person was when I first saw them to where they are at the end of their sentence. Every now and then, I will get a letter from one of them and it makes me feel like, “ok, you know, I am doing something that matters.”

I think the things that make you successful are the same things that make the job difficult. I have a Type A personality. I want all of the t’s crossed and all of the i’s dotted and it made me a good trial lawyer. But, trying to balance the workload while striving for perfection can be very stressful. You reach a point where you have to let go a little bit.

The job has also become more stressful, in part, because of the electronic age. With cell phones and the internet, you are constantly connected to the office and it’s very difficult to let that go. It is very hard to disconnect and to some extent, we are kind of expected to not disconnect. You just have to find ways to try to set boundaries and turn the phone off. It’s a wonderful job, but it is very demanding.

What advice would you give to young lawyers or law students who have similar legal aspirations?
You know, I think the most important thing is their reputation as a lawyer. You know, from the day they start practicing, it is civility and professionalism to opposing counsel and before the court—in their filings, in their emails, what they say—because their reputation is so important. It starts from day one. Your reputation develops so fast, and you can’t un-ring the bell. You can be really smart on paper, but if you have a bad reputation, you’re not going to go real far.

Do you have a favorite memory from Catholic Law?
I made so many good friends there. I had never left Louisiana and I didn’t know a soul the day I walked on campus, but I had so many friends right away. I remember in the very beginning we were broken down into three sections for Basic Legal Techniques (BLT) and in the BLT class we made friends immediately because of it being such a small group. Shortly thereafter, we formed an intramural softball league and we just had so much fun with those kinds of activities outside of class. I also lived at Trinity because, at that time, they offered the dorms to us. So really, I had these different groups where I could make my friends. We would go and do something fun, then we would go to the library together, and then we’d go off to Colonel Brooks Tavern or wherever. It was a good balance of work and play and study. Catholic was just a very healthy environment.

Part of what makes Catholic Law so special is the community and the people it represents. Is there any relationship from your time here (a professor, lecturer, staff member) that was particularly impactful to you?
As I mentioned, Lou is really just so influential in my life, even beyond law school I stayed in touch with him. I would call him sometimes with these twisty, weird evidentiary questions and he would talk through them with me. He even helped me get an interview at a Federal Public Defenders’ office when I wanted to get out of the state system. I was very fond of Nell Newton as well. She advised the Law Review group and I hung out with that group. She would have us over for dinner and she was just a lot of fun.

Who have you kept in touch with from school?
Two in particular. Tom Moran, he’s still in the D.C. area, in McLean, and Patricia West.