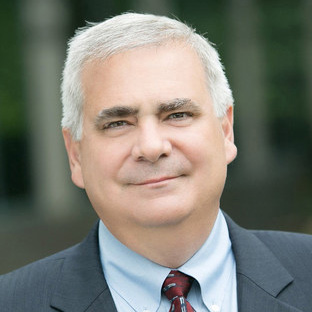 Can you tell us a little bit about your background?
I grew up in the state of Michigan and I went to the University of Michigan as an undergrad and I graduated in 1983. When I graduated from college, I went to work for a company called Arthur Andersen, they used to be one of the “Big Eight” accounting firms back then. I was in their consulting division and I worked there for a couple of years. I decided that it ultimately wasn’t for me and I wanted to try my hand at law school.

Why did you decide to attend Catholic Law? (edit: so you’d say the part-time evening program was a big drive for you to attend Catholic?)
As I mentioned, when I graduated from college, I ended up moving to the Washington, D.C., area actually in Maryland, working for Arthur Andersen there. I had always wanted to be a lawyer, so I started applying to law schools. I was married at the time and I knew I couldn’t be a full-time student, so I was applying to night programs in the area. I applied to schools that had, what I thought, were the best night programs and I applied to Catholic’s night program. I actually went to the University—I walked in and knocked on the door, and talked to a couple of people in the admissions office—and they accepted me. I started law school in 1985 and ultimately graduated in 1989.

How did you know you wanted to continue to pursue law?
Well, ultimately I didn’t.

Can you discuss your early career development?
When I graduated law school, I was recruited to work for a law firm in Washington, D.C., called Bishop, Cook, Purcell and Reynolds and they were pretty small. They ultimately merged into Winston and Strawn, the Chicago firm, and I was working in a group that focused more on business transaction. So we did a lot of financing, but one of the unique clients that that group had was a small generic pharmaceutical company located just outside of New York City. That company got into some trouble with the FDA and there were some issues that had to be resolved and the firm’s partner sent me up to New York to see if we could help them through their challenges and I never left. It wasn’t too long after that that the CEO asked me to become the general counsel of the company, Barr Laboratories. I worked there as general counsel for about six or seven years and then moved from being general counsel to Chief Operating Officer. So, I got a sort of broad background in business and how a pharmaceutical company is run. And I found out that I enjoyed being an operator. My legal training was helpful in my career, but then I sort of moved outside of the law and moved to operations and how corporations run—everything from running the salesforce to making sure that we make high-quality products, that we had good regulatory filings. Pharmaceutical companies run the gamut of every legal group in America looking at them. You have EDA, FDA, EPA—they all touch pharmaceutical companies. So, having a law background was really quite helpful. I did that for a number of years and then ultimately I got recruited to become CEO of another company called Watson, and I took that job and I was CEO of that company for just about 10 years. That group of 25 years was an exciting time. It really was.

Are you where you expected to be at this stage of your career?
No, I certainly hadn’t mapped it out. I knew when I was in law school that I wanted to work more on the business side than on the litigation side of things, and I figured I would be doing corporate law. I didn’t expect the transition from a general counsel position to a much more hands-on operating role, and then ultimately to a CEO role. You know that wasn’t something I mapped out in my head—that I really wanted to be a CEO of a pharma company—but it worked out and, once it happened, I certainly enjoyed the ride. In fact, I was CEO of a couple companies and I have enjoyed both experiences immensely.

What were/are the most rewarding parts of your job? What were the biggest challenges?
Well, as CEO, one of the single biggest jobs you have is setting the strategic direction of the company. That strategic direction is not only your financial plans and where you want to take a company to position it to be successful, but it also encompasses the people. I think the hardest challenge most CEO’s have is blending the strategic view of the company with the employees, so that the people, your fellow colleagues, are all pulling in the right direction. Everyone understands the strategic vision and everyone is on board with that strategic vision, and it’s so easy to get off track. I’m sure that’s true for every environment that leaders have to deal with, but certainly that leadership role was the hardest thing to have to get your arms around. It’s strategy, it’s vision, it’s colleague engagement, it’s all of those things; and so it’s pretty cool, pretty fun, but also challenging.

What advice would you give to young lawyers or law students who have similar legal aspirations?
I think it’s fair to say, you have to seize opportunities that present themselves. And sometimes, it’s scary. Corporate settings are not risk-free and can be very daunting. I think people need to go in a) with their eyes open, but b) able to seize the moment. If an opportunity presents itself, you just have to jump at it—even if it may be a little less money or a little less certainty, you sometimes have to do that. There is a risk-reward ratio here that people have to get comfortable with, so I guess that’s the advice I would give them.

Do you have a favorite memory from Catholic Law?
Actually, I have several, but it is the time I spent with my study group. We had a great group of people and we were all in night school. We all had families, we all had jobs, and it was a challenge to get work done and find time to study. We worked together to get ourselves through school. I think that was an experience that taught me a lot about how teamwork and working with people you trust, and people who are driven, is really something special. I think that was the single most special moment I had.

Part of what makes Catholic Law so special is the community and the people it represents. Is there any relationship from your time here (a professor, lecturer, staff member) that was particularly impactful to you?
I would say, there were several professors that helped me get my arms around the fact that I could be a corporate lawyer, and be a decent corporate lawyer. Dean Ralph Rohner was instrumental in understanding the needs of the night students. When he taught the classes at night, he understood, but also taught a very interesting class. He helped me understand that corporations, and the whole corporate concept, was the direction that I wanted to go. I thought he was extremely helpful. Many of my professors were terrific. What Catholic Law did, and kind of why I chose them originally, was their main faculty taught night students. You got the opportunity to work with both Adjunct Professors as well as Full-time Professors and that was a big draw for me. I wanted that experience and that was very key in my decision making.

Who have you kept in touch with from school?
My study group. We haven’t been in super close contact, but we certainly all got together for our 30th reunion and it was really nice to see everybody. All five of them—Bill, Lisa, Carla, and Rosalie—that’s the group that we kind of all hung out with. And that was the group I was talking about earlier. We’ve all kind of stayed in contact and watched each other’s careers, and from time-to-time helped each other when we could. It was fun to get together and see everybody again and really spend an evening together. I’m sure we’ll do it again soon.

Final Thoughts…
I would like to add, I’ve also had the privilege of sitting on the Board of Visitors now for a number of years, and that has been a really interesting experience. I would highly recommend that people think about donating some time to do it. I think it has been very helpful to understand the challenges that law schools have today, the challenges that law students have today, as well as providing an opportunity to give back a little bit too. So, I would recommend that to my fellow alumni.