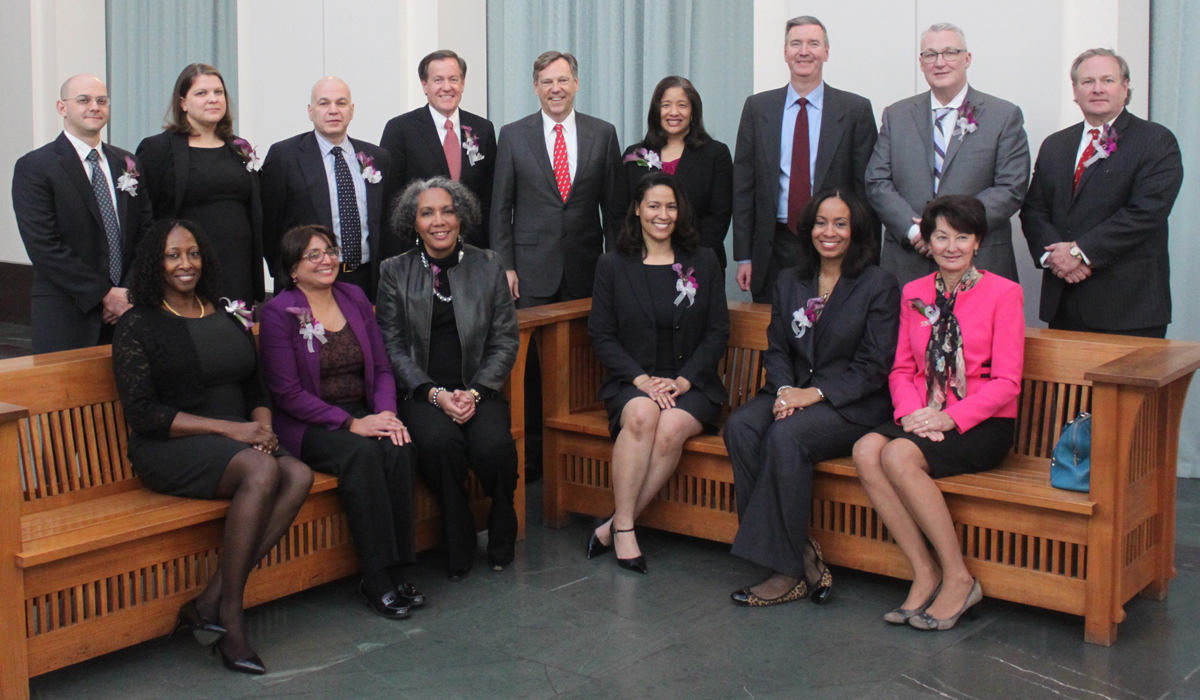 Catholic Law alumni are leaders, innovators, and standard-setters for excellence. They continue to make their mark in a variety of fields including the judiciary (like those pictured above), senior federal service, academia, the Armed Forces, and many more. Our graduates listed below are a small sample of alumni who have distinguished themselves professionally and personally. To stay current with what Catholic Law alumni are doing, please click here.

What do some of our most accomplished graduates have to say about their training at Catholic Law?

"If I could do it all over again, I would do it exactly the same."
- Michael Bidwill, 1990, President, Arizona Cardinals

“The position of CUA Law in D.C. with its opportunities for courses, contacts and employment in a multitude of fields is one of the key reasons for anyone to consider the Law School."
- John G. Carberry, 1973, Vice President, Oppenheimer Multifamily Housing and Healthcare Finance, Inc.

"When I think back of my time at Catholic and I am struck by what a unique place it is in terms of this mix of classroom experience and practical experience. We are located right in the middle of Washington DC and that gives us access to very talented full time professors and talented adjunct professors that our students get to benefit from. I feel incredibly blessed to have the good fortune of landing at Catholic many, many years ago, developing friendships and getting this solid foundation that enables me to serve in Public Office today."
- Brendan T, Carr, J.D., 2005, Commissioner of the Federal Communications Commission

All of these experiences have made me a better lawyer, enriched my life and, hopefully, made me a better person. I know I made the right decision 58 years ago to attend the Columbus School of Law at CUA."
- Michael F. Curtin, 1965, Board of Visitors Member, Partner, Curtain Law Roberson Dunigan & Salans

"My best memories from the Law School start with the professors who taught with a passion for the law and for their students. I still have that same passion for the law, for our clients’ needs, and for the young lawyers at our firm. Next are the friendships with other students, which were a bedrock for success in the evening division. Finally, when useless anxiety seemed to cloud the horizon, I could usually find a mass to attend only steps away, sometimes presided over by a favorite professor."
- Michael Hannon, 1980, Founder, Hannon Law Group, LLP

"I began at the Catholic University School of law with no intention of ever becoming an attorney; I wanted to be a more knowledgeable Supreme Court reporter for a newspaper.  But there is a grain of truth in the field of clichés – studying the law teaches you how to think.  The professors and the Catholic University law school community opened my eyes and my mind and led me down a different career path from the one I expected to travel.  As a reporter you watch other people do things and describe their achievements – or failures – for readers.  After learning about the power of the law, I wanted to be the one “doing.” The strong tradition of service, deeply embedded at Catholic University, influenced my legal career...."
- The Honorable Diane Kiesel, 1985, Acting Supreme Court Justice, 12th Judicial District of New York

"My law school experience...instilled in me the importance of giving back and contributing to the profession and society at large.”
- Roberta Liebenberg, 1975, Senior Partner, Fine, Kaplan and Black, R.P.C.

"There is no doubt that attending the Catholic University of America's Columbus School of Law was a turning point in my life. Dean Miles, the unparalleled faculty and staff, and my peers exemplified the true power and range of what a law degree could mean for my career, and empowered me to embrace my desire for a non-traditional legal path."
- Jennifer P. Lim, 2010, Founder and Executive Director, Republican Women for Progress

“I loved this law school… Nowhere else will you receive the nurturing and care that our faculty and staff provide.”
- S. Jenell Trigg, 1997, Partner, Lerman Senter PLLC.


“The Catholic University of America Columbus School of Law changed the trajectory of my life and guided me to a solid path of public and community service. Through the Office of Career and Professional Development, I was afforded opportunities to intern with the U.S. House Judiciary Committee on Civil Rights and Constitutional Law, United Mine Workers of America, the Social Security Administration, and Houston and Gardner.”
- Deborah Watson-Stokes, 1990, Supervisor of the Municipal Court Unit, Assistant District Attorney for the Philadelphia District Attorney’s Office

The Honorable Edward J. Damich, 1976
Judge on the United States Court of Federal Claims. Served as Chief Judge from 2002-2009.

Michael J. Desmond, Esquire 1994
Is the 48th Chief Counsel of the Internal Revenue Service, where he oversees a staff of more than 2,000 employees, including approximately 1,500 attorneys. Mr. Desmond began serving as Chief Counsel on March 4, 2019, following his confirmation by the U.S. Senate on February 27, 2019. As Chief Counsel, he is also an Assistant General Counsel in the Department of the Treasury.

John Devaney, Esquire 1983
Managing Partner of Perkins Coie. His appointment marks the first time the 102-year old Seattle based firm named a D.C.-based managing partner. He was listed in "Super Lawyers" for Washington D.C., 2013–2014. Prior to joining Perkins Coie, he was a trial attorney with the U.S. Department of Justice, where he worked in the Civil Rights Division.

Ernest W. DuBester, Esquire 1975
Began his third term as a Member of the Federal Labor Relations Authority (FLRA) on December 11, 2017. Initially appointed and renominated by President Barack Obama, renominated again by President Donald Trump, and unanimously confirmed by the U.S. Senate to all three terms, Member DuBester has served as an FLRA Member since August 2009.

William D. Duhnke III, J.D. 1996
Was appointed by the Securities and Exchange Commission (SEC) to serve as Chairman of the Public Company Accounting Oversight Board (PCAOB).

The Honorable Stephanie Duncan-Peters, 1977
Senior Judge, Superior Court of the District of Columbia

Naomi Churchill Earp, Esquire 1982
Was nominated as assistant Secretary for Civil Rights at the U.S. Department of Agriculture. Served as Chair of the U.S. Equal Employment Opportunity Commission, 2006-2009.

Christine Luchok Fallon, Esquire 1977
Reporter of Decisions, Supreme Court of the United States. She is the first woman to hold the position.

Alice S. Fisher, Esquire 1992
BOV Member. Partner, Latham & Watkins, LLP. Her practice is mainly on white collar criminal investigations and internal investigations. From 2005-2008, she served as assistant attorney general of the Criminal Division at the US DOJ.

Colonel Mary Lou Keener, USAF (Ret.), Esquire 1982 Former General Counsel of the Department of Veterans Affairs. In 2000, Colonel Keener served with Department of Defense as Deputy Assistant Secretary of the Air Force (Force Management and Personnel). She is now retired and serves as an Outside Board Member to the Military Order of the Purple Heart Service Foundation.

The Honorable Milton C. Lee, 1985
Adjunct Professor of Law, UDC School of Law. Was appointed Magistrate Judge of the D.C Superior Court in Dec.1997. Has been adjunct at Georgetown and taught Harvard Trial Advocacy Program.

The Honorable Susan Longley, 1988
Maine State Senator from the 11th District from 1994-2002. Currently Judge of Probate for Waldo County, ME.

Veryl Victoria Miles, Esquire 1980
Dean of The Catholic University of America’s Columbus School of Law (2005-2012) and professor of law. Deputy director of the Association of American Law Schools (2001–2003); member of the special committee on the Uniform Bar Examination for the National Conference of Bar Examiners (2008-2012); member of the American Bar Association’s Accreditation Committee (2008-2012).

Jeffrey R. Moreland, Esquire 1970
Vice Chairman, Amtrak Board of Directors; Chairman, Government Affairs and Legal & Corporate Affairs Committee. Nominated by President Obama as a Director of the Amtrak Board and confirmed by the U.S. Senate in 2010. Mr. Moreland earlier served as an Executive Vice President for Public Affairs at Burlington Northern Santa Fe Railway Company.

The Honorable William J. Nealon, L.L.B., 1951
Senior Judge of the United States District Court for the Middle District of Pennsylvania; served as Chief Judge from 1976 - 1989. President John F. Kennedy appointed him to the post in 1962, and he is the longest-serving district judge in the history of the 3rd Circuit. The William J. Nealon Federal Building and United States Courthouse, located in Scranton, is named in his honor.

The Honorable William T. Newman, Jr., 1977
BOV Member. Chief Judge, Arlington Circuit Court. Appointed in 1993, became Chief Judge in 2003. Elected to the Arlington County Board in 1987. Named one of the Best Trial Judges in DC by Washingtonian magazine.

David Redl, Esquire 2006
Ex-Assistant Secretary of Commerce for Communications and Information as of May 2019. Ex-chief counsel at U.S House Committee on Energy and Commerce. Ex-director of regulatory affairs at CTIA, the largest wireless industry trade group in the U.S. The Hill listed him as one of the 16 people to watch in tech.

*Ralph Rohner, Esquire1963
Dean of The Catholic University of America’s Columbus School of Law (1987-1995) and professor of law (retired). He holds the James Whiteford Chair of Common Law at Catholic University. Professor Rohner is a founding member and past president of the American College of Consumer Financial Services Lawyers.

The Honorable Charles Shaw, Jr., 1974
Senior District Judge on the United States District Court for the Eastern District of Missouri.

The Honorable Elizabeth Timothy, 1989
U.S. Magistrate Judge for the Northern District of Florida

S. Jenell Trigg, Esquire 1997
Chair of Lerman Senter PLLC’s Intellectual Property and New Media & Technology Practice Group. Former assistant chief counsel for telecommunications for the Office of Advocacy, U. S. Small Business Administration. Recognized in 2013 as one of the inaugural "Top 25 Inspirational and Engaged Leaders" by the Rainbow PUSH Coalition.


James P. Ulwick, Esquire 1977
Recently accepted the prestigious John Adams Award on behalf of 84 members of the Criminal Justice Act Panel. The award is presented each year by the U.S. District Court for the District of Maryland to an attorney or attorneys on the elite panel who best exemplify the qualities exhibited by former President John Adams in representing indigent clients. Married to Suellen Ferguson, 1977.
(back to top)

*Alumni who are now deceased.