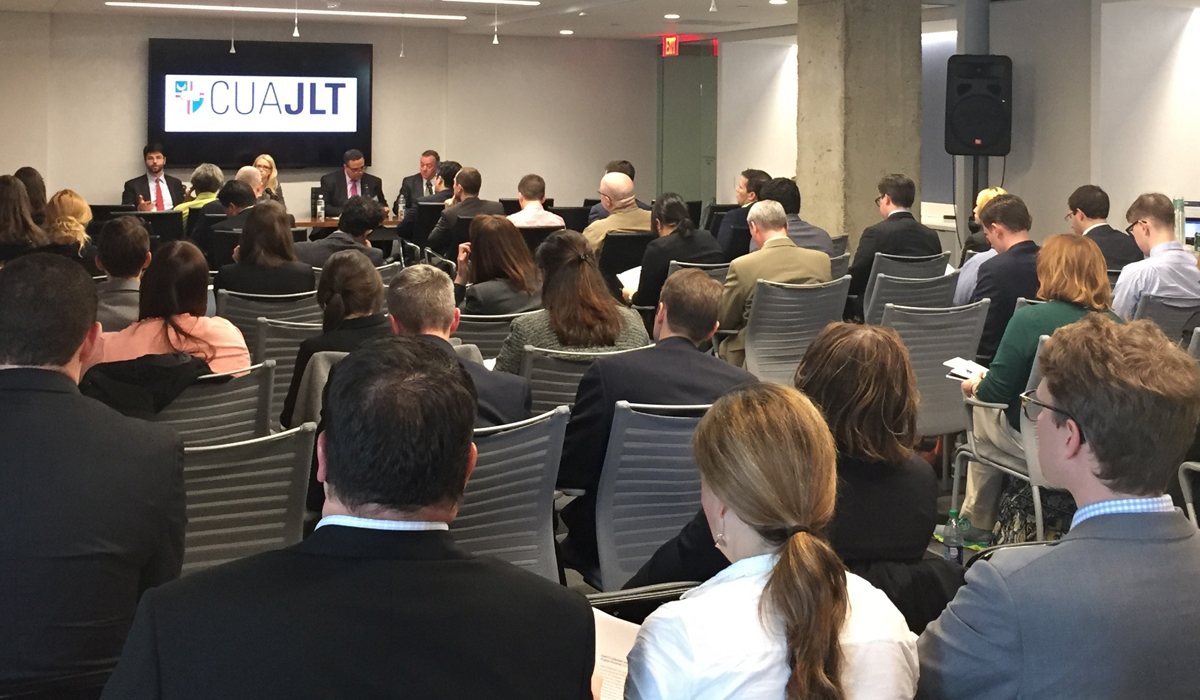 The Journal of Law and Technology's 2020 spring symposium, "Financial Technology: The Future of Fintech," provided an opportunity for students, faculty, and practitioners to hear from experts regarding recent developments in various aspects of Fintech; focusing on the regulations of Fintech as well as other legal considerations in the field.

The February 14 program consisted of two, panel discussions and a keynote address from Paul G. Cellupica, Chief Counsel and Deputy Director of the Securities and Exchange Commission's (SEC) Division of Investment Management. Cellupica was joined by keynote moderator, Jennifer McHugh, Associate Director from the SEC's Office of Disclosure Review and Accounting. Cellupica and McHugh discussed digital assets, robo-advisors, and fund disclosures within Fintech in a collegial "fireside chat."

The Journal of Law and Technology’s 2019 spring symposium, “Data Privacy Symposium: The Current and Future State of Data Privacy Regulations,” provided an opportunity for students, faculty, and practitioners to hear from experts regarding recent developments in data privacy regulation. It focused on the impact that regulation or, lack of regulation, has on American people and businesses.

The program consisted of two, panel discussions and a keynote speech from Ben Wiseman, Director in the Office of Consumer Protection at the Office of the Attorney General for the District of Columbia.

The Journal of Law and Technology’s annual symposium, “Repeal of The Open Internet Order of 2015: A Discussion on a Dynamic Internet and the Legal Road Ahead,” provided an opportunity for students, faculty, and practitioners to hear from experts about the positives and negatives of regulating broadband Internet service providers and the economic, social, and political effects of the new rules.

The March 16 event opened with introductory remarks by CUA Law Professor Elizabeth Winston. The program consisted of a panel discussion and a keynote speech from Commissioner of the Federal Communications Commission Brendan Carr '05.

Carr, who was nominated to serve as a Commissioner of the FCC and was confirmed unanimously by the United States Senate, discussed the 2015 FCC reinstitution of the Open Internet Order of 2010 which established rules against blocking, throttling, and paid prioritization. He also discussed the new rules the FCC proposed under the title “Restoring Internet Freedom” to amend the 2015 Open Internet rules.

The Journal of Law and Technology’s annual symposium, “The Impact of the Patent Trial and Appeal Board,” provided an opportunity for students, faculty, and practitioners to hear from experts about the creation and recent developments of the PTAB and the impact of its decisions on the U.S. patent landscape.

The February 28 event opened with introductory remarks by Dean Daniel F. Attridge. The program consisted of two panel discussions and a keynote speech from David P. Ruschke, Chief Judge for the Patent Trial and Appeal Board (PTAB).

Ruschke, who leads the PTAB, which is authorized to conduct post-grant trials following the passage of the American Invents Act in 2011, discussed his insights as a PTAB judge.

The first panel discussed the differences between PTAB and district court litigation, including discovery, claim construction, and timing, and how concurrent litigation can affect the strategy and outcome of litigation due to estoppel and the speed of PTAB proceedings. The second panel included an introduction to Inter Partes Review (IPR) proceedings, focusing on the AIA and its impact on IPR and ex parte reexamination, as well as current IPR issues at the PTAB and causes to watch in the coming year.

Organized by the Journal of Law and Technology in association with the Federal Communications Bar Association, “Cybersecurity and Privacy in the Internet Economy: Information Sharing, Data Security, and Intellectual Property,” presented three panels of experts. The symposium examined the implications of the growing number of reported cyberattacks and data-breaches at private and public entities in recent years and the legal and policy responses.

Hosted by Wilkinson Barker Knauer, LLP, the event kicked off with introductory remarks from Bryan Tramont, managing partner of Wilkinson Barker Knauer, LLP and adjunct professor at CUA Law and CUA Law Dean Daniel F. Attridge. “The best thing about today’s symposium is that it really takes scholarship to the level where it ought to be. It is something that is alive. It is not simply found in a printed form and more importantly, it includes everyone who can been affected by it.” Attridge said.

Two panels of leading communications professionals represented the FTC, Capitol Hill, the FCC, device manufacturers, carriers, and other points of view. The keynote address was given by FTC Commissioner Maureen K. Ohlhausen.