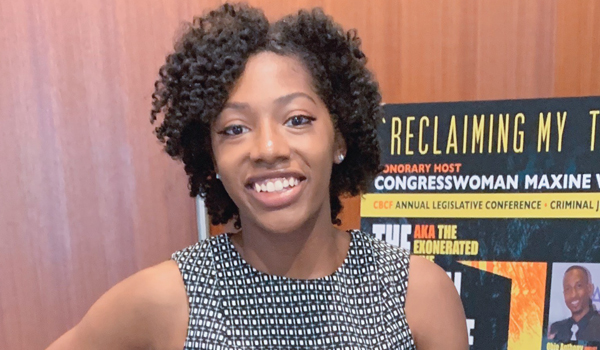 Catholic Law is committed to providing students with practical skills that will help them make lasting contributions to the legal profession and enhance the welfare of the broader community. As she nears graduation, third-year law student Shala Barney reflects upon her time at Catholic Law and her goal of using her J.D. to invest in and give a voice to marginalized communities.

“Make the plan, work the plan, success.” This is the mantra Barney’s mother repeatedly reminded her of while growing up in Pittsburgh, Pennsylvania. Barney watched her mother work hard—putting herself through nursing school, while also supporting Barney through private school education. While in school, it quickly became evident to Barney that there was a disparity in resources between the community she went to school in and the one in which she grew up. “I realized Pittsburgh, to me, did not invest in and value minority communities.” This ignited Barney’s passion to use her education to create change.

From an early age, Barney planned to go to college and then straight to law school. Pursuing a law degree had been an interest of hers since childhood. Seeing how different friend groups experienced similar situations, particularly within the law, had increasingly reinforced Barney’s feelings of being called to provide support for minority communities. “I wanted the knowledge of how to use the law to advance sectors of the population who are often cut out of the conversation.” After earning a degree in Economics from La Salle University in Philadelphia, Pennsylvania she was ready to pursue a J.D., and Barney began searching for schools in the D.C. area. On a friend’s recommendation, Barney looked into Catholic Law and she quickly decided that it was the place for her. When her grandfather was denied parole in 2020, Barney felt especially affirmed, “This confirmed once again my deep need to finish law school strong and use my career for change.”

Since coming to Catholic Law, Barney has taken advantage of numerous opportunities to get involved and support on- and off-campus communities. This year, Barney is an Associate for the Journal of Law and Technology (JLT) as well as President of the Black Law Students Association (BLSA). In her later role, Barney has taken the lead in important ongoing discussions within the Law School. In addition to her co-curricular activities, Barney has also pursued several practical learning experiences. She has participated in two clinics. The first was the Georgetown Law-based Health and Justice Alliance Clinic (HJA), the second was Catholic Law’s Families and the Law Clinic (FALC). About those experiences, Barney shared, “While at HJA, I learned a lot about the economic and housing history of D.C. and minority people in D.C. The clinic afforded me the opportunity to learn and serve the community that I just moved to. While at FALC, I was able to once again learn more about the DMV residents and help with pressing family matters.”

In the fall of 2020, Barney turned her attention towards a topic at the forefront of many Americans’ minds—the 2020 election cycle—and she began working on Law Students Protect the Vote (LSPV). To create this initiative, Barney and several Catholic Law students partnered with Howard Law students. The student-led initiative aimed to bring law students together to help ensure that every eligible voter could exercise their right to vote. Barney explained, “It was and still is very important to protect our democracy and I was happy to be a part [of the initiative].”

With the high amounts of stress associated with the intensity of pursuing a law degree, Barney acknowledged the importance of finding a work/life balance. Things as simple as time with family or taking an opportunity to dance around her apartment help Barney to feel grounded. Barney has also found that working outside of law school helps her to de-stress. “I was a waitress for most of my time while in law school which I know can sound like added stress, but for someone like me who has always worked while in school, I used waitressing as allocated free time to talk to people who were not in law school. It was like paid social hour.”

Of course, the COVID-19 pandemic has also added new and different types of stress to the law school experience. The unprecedented nature of the pandemic has created numerous difficulties, but Barney also noted that it has been an additional learning experience. “I’ve learned that it’s good to plan and plan out your life, but ultimately you are not in control of what happens day-to-day. It is on us to just stay strong and not lose it.” She continued, “I stay grounded honestly through my religion. I have become a lot more centered with this time to myself and found a lot of inner peace in this noisy world. I also stayed focused though on the things I could be doing. For example, I kept applying and applying for jobs and even changed the type of jobs I went for, and I finally got a job upon graduation!”

With just months left in her final semester as a law student and eager to start her career, Barney concluded, “It has been a journey and I have and continue to learn so much about myself. I'm grateful for that!”