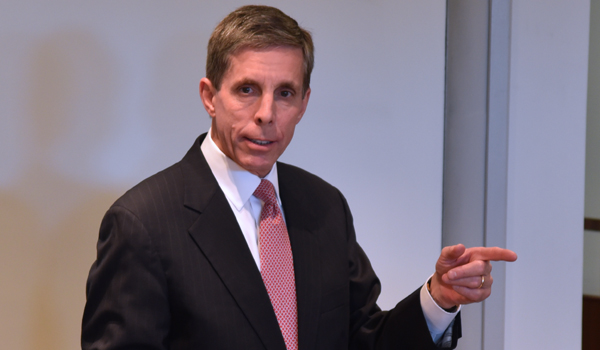 On October 27, 2022, Catholic Law hosted the first Faith in Action event of the 2022-2023 academic year. The program featured William H. Rooney, partner of Willkie Farr & Gallagher LLP and Co-Chair of Willkie’s Antitrust & Competition Practice Group, New York, NY. In his talk, “Reflections on Integrating a Life of Faith and a Legal Vocation,” Rooney spoke about practicing your faith, ordering your goals in life within a hierarchy, sanctifying your work, and trusting in God's providence. These four points were used to help illustrate the integration of one's faith and work. Following his talk, Rooney answered questions from the audience.

Elizabeth Kirk, Director of Catholic Law’s Center for Law and the Human Person, began the program by welcoming the group and thanking Rooney for speaking. Before turning the podium over to Rooney, she briefly drew attention to the final words of St. Thomas More: "The king's good servant, but God's first." She noted that, while there is some debate over whether it was “but” or “and” that was said, his words ultimately point to the importance of a unity of life that transcends personal and professional boundaries.

The Faith in Action series was founded to promote the integration of faith and the practice of law through the witness of legal professionals and is sponsored by Catholic Law’s Center for Law and the Human Person. The next Faith in Action event is on November 15, 2022, and will feature Fr. Robert Boxie, Esq., priest of the Archdiocese of Washington and the Catholic Chaplain at Howard University in Washington, D.C.