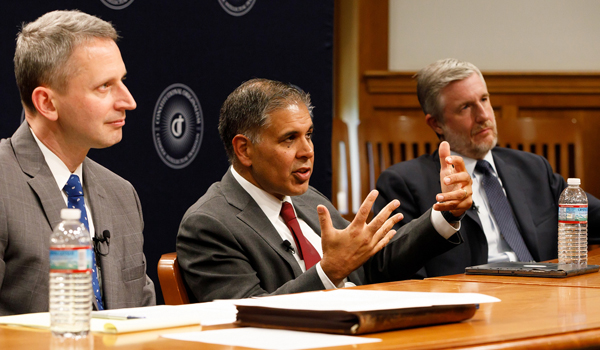 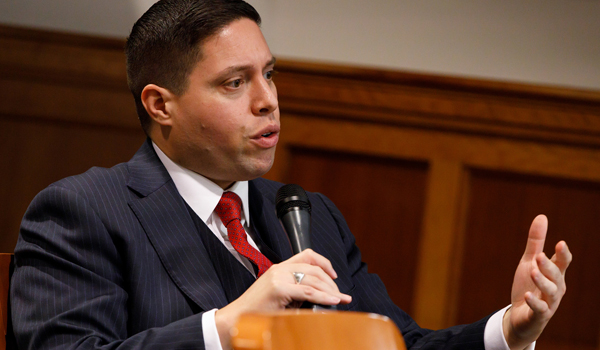 J. Joel Alicea, co-director of CIT and assistant professor of law at Catholic Law, provided introductory remarks about CIT and the fall events before turning the program over to Judge Duncan to moderate the discussion.

Judge Duncan opened by stating, "The two judges, who are both to my left, are Catholics and so am I. Now, this topic is a broad one, it can go in many different directions. One might be 'What is the relationship between a judge’s Catholic faith and his job as a federal judge or her job? Is there any relationship? Should there be a relationship?' Another way that occurred to me of putting it as 'Are we up here judges who happen to be Catholics? Or are we Catholic judges? Does it matter whether the Catholic comes before or after "judge"? And what about originalism? How does being a Catholic or something in the Catholic intellectual tradition speak to that very important methodological topic?'"

Judges Thapar and Matey spoke about their journey to Catholicism and discussed recent controversies about the relationship between originalism and natural law.

This event is the fourth of CIT’s eight speaker events in the fall of 2022. Other events this fall include co-sponsorships with The American Enterprise Institute, The Center for the Study of Statesmanship, The Georgetown Center for the Constitution, The Institute for Human Ecology, and The Thomistic Institute. Through these events, CIT aims to become the center of scholarly conversation about the relationship between the Catholic intellectual tradition and American constitutionalism and to reach beyond the academy to think tanks, young professionals, and the broader public.