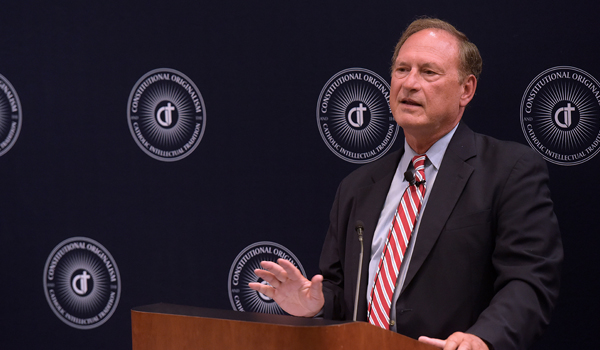 On September 27, 2022, the Project on Constitutional Originalism and the Catholic Intellectual Tradition (CIT) hosted a special inaugural lecture by The Honorable Samuel A. Alito, Jr., Associate Justice, Supreme Court of the United States. Justice Alito was named the Honorary Chair of the Advisory Council of CIT last April.

Dean Stephen Payne opened the event with welcoming remarks to the students and other guests in attendance, in which he highlighted the continuing enhancement of the law school’s academic standing and its unique role in legal education as an institution devoted to both the dialogue between faith and reason and the excellent preparation of law students for practice. He then introduced Father Aquinas Guilbeau, O.P., Chaplain of the University and Director of Campus Ministry, to give an opening prayer, followed by J. Joel Alicea, Co-Director of CIT and Assistant Professor of Law. 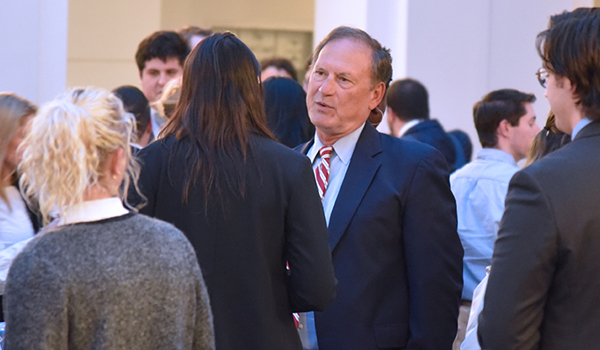 Following the lecture, the audience was invited to the Louise H. Keelty and James Keelty, Jr. Atrium for a reception. Justice Alito remained after his lecture to talk and mingle with students.

Justice Alito was nominated by President George W. Bush and assumed office on January 31, 2006. He is the 110th justice and the eleventh Catholic to serve on the Supreme Court. Justice Alito also delivered the 2008 commencement address at the Columbus School of Law, where he was awarded the degree Doctor of Laws, honoris causa, from The Catholic University of America. More recently, in November 2018, Justice Alito spoke at an event hosted by Catholic Law’s Center for Religious Liberty.

CIT promotes scholarship that explores the relationship between the Catholic intellectual tradition and American constitutionalism. That tradition is deep and rich, including philosophical and theological accounts of law and politics by such figures as St. Augustine and St. Thomas Aquinas. Although CIT’s primary focus is on theories of constitutional law, such as originalism, its ambit is broad and covers the relevance of the Catholic intellectual tradition for constitutional history, doctrine, and other fields of study.

The event is the second of CIT’s eight speaker events in the fall of 2022. Other events this fall will include co-sponsorships with The American Enterprise Institute, The Center for the Study of Statesmanship, The Georgetown Center for the Constitution, The Institute for Human Ecology, and The Thomistic Institute. Through these events, CIT aims to become the center of scholarly conversation about the relationship between the Catholic intellectual tradition and American constitutionalism and to reach beyond the academy to think tanks, young professionals, and the broader public. To learn more about CIT, click here.