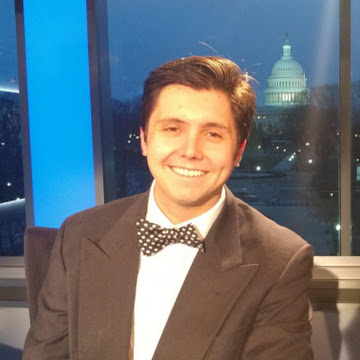 As the mission of Catholic Law states, the Law School strives “to discover, preserve, and impart truth in all its forms; to achieve academic distinction in the Catholic intellectual tradition; and to assure, in an institutional manner, faithfulness to the University’s Christian inspiration.” Its students eagerly pursue an exceptional legal education that prepares them for their future vocation. For first-year law student Michael Cozzi, his decision to pursue a law degree has been an opportunity to grow in his academic and professional curiosity and discern his vocation. As his first year draws to a close, Cozzi took a moment to reflect on his Catholic law experience so fair.

Born and raised in the sunny suburbs of Los Angeles, California, Cozzi has spent the last eight years in Washington, D.C. Originally coming to the capital to attend The Catholic University of America (CUA) for his undergraduate degree, Cozzi has found his time in D.C. to be invaluable. He shared, “I have had the most exceptional time of my life in those eight years. I have the honor of being politically and socially involved in a wide array of Washington, D.C.’s finest institutions, all of which have given me a well-rounded education.” In the years following graduation from CUA, Cozzi found a position working for NewsMax Media, a position he still holds today, writing articles for their website and covering topics ranging from foreign policy and Supreme Court cases to book reviews and interviews with experts across a variety of fields.

With several years of work experience, Cozzi began to consider what should come next for him. Thinking of an adage his father-in-law shared with him, “the law touches all things in life,” Cozzi felt called to pursue a career in law. Cozzi explained, “I think that choosing to go to law school is much like discerning any vocation in life.” He continued, “My decision to attend law school arose from an ongoing fascination and study of the U.S. Constitution that began long ago. Over time, that singular fascination matured into a greater curiosity for administrative law, public policy, etc. while I worked and interned around Washington.” Of course, when it came time to choose a law school, Catholic Law quickly rose to the top of the list. Cozzi’s history with the school—established during undergrad—made Catholic Law feel like a natural fit.

While choosing to begin law school in the midst of a global pandemic may seem daunting to some, Cozzi has viewed the decision as a worthy challenge, one that has allowed him to consider the depth of character not only for himself but that of his classmates as well. He reflected on his 1L year in a pandemic, “While there are the more ostensible setbacks, the benefit is that you may demonstrate the steadfast nature of your character by choosing to face this pandemic with maturity and faith in what lies ahead beyond the storm.”

Despite those obstacles, Cozzi has quickly found his place within the Law School community. This year, he co-founded the Italian American Law Students Association and is a member of Catholic Law’s chapter of The Federalist Society. Cozzi has also enjoyed numerous events held by other student-led organizations on campus. Just a year into the JD program, Cozzi has not yet participated in the wonderful externship and clinical opportunities that come along with being a law student in D.C., but it is an aspect of law school that he eagerly looks forward to in his remaining years. With much excitement, he shared, "I now have an internship with the Law Office of George F. Braun and the Watson Group for lobbying."  Cozzi also noted, “As a proud member of the John Carroll Society, I think that there’s a calling that every Catholic lawyer should have to sanctify the legal work that we aspire to practice.”

It has been a busy year for Cozzi, and with two more to go, there’s no sign of his schedule letting up. In order to maintain a sense of balance while meeting the rigorous demands of law school, Cozzi looks to his fiancé and his faith as essential parts of his life. Cozzi shared, “They are the two bedrocks that I hold fast to when I am presented with the challenges that come with embarking on a new chapter in life.” He also expressed a deep appreciation for his peers and the support they provide, “My friends in law school also encourage my perseverance, because I know that my exceptionally bright peers are experiencing the same academic rigor as I am, and they support me as much as I support them.”

Having successfully navigated his first year at Catholic Law, Cozzi is grateful for his decision to start his journey toward a law degree and looks forward to new opportunities to learn and grow through the remainder of his law school career. He concluded, “My time at Catholic Law has been a tremendous experience that has taught me how to be a better student, writer, and thinker. The friends who I have met at Catholic Law are some of the greatest people who I could hope to accompany me on this great vocation in life.”