In the Penultimate Program of the Spring Series, Contemporary Challenges in American and Global Law Examines Retirement Savings Policy as a Human Right 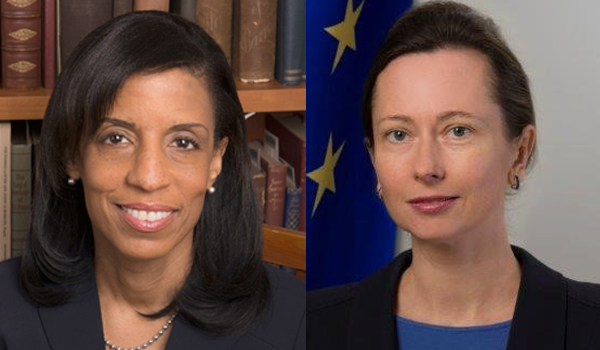 May 12, 2021, marked the penultimate program in the spring season of Contemporary Challenges in American & Global Law. The event focused on “Examining United States Retirement Savings Policy through the Lens of International Human Rights Principles.” Catholic Law Professor Regina T. Jefferson provided remarks from the American perspective while comments were made by prof. UKSW dr hab. Elżbieta Karska (IBTSLP 2000), Professor of Law at the Faculty of Law and Administration of the Cardinal Stefan Wyszyński University in Warsaw, Poland.

Jefferson is a nationally recognized expert in pension law, employee benefits, and tax law. In 2015, she was appointed by President Obama to the Pension Benefit Guaranty Corporation’s Advisory Committee and is currently serving a second term. Jefferson has testified before the U.S. Congress and briefed congressional staff on employee benefits and tax topics. With her extensive experience in the area, Jefferson opened the program by posing the question: is retirement a human right? Through the lens of international human rights, Jefferson considered the types of activities governments should support, the manner in which governmental support should be structured, and the extent to which such support should be provided—in particular, how these points relate to the American private retirement system. Jefferson organized the remainder of her time to provide an overview of the recent history of human rights law and the recognition of human rights for the elderly, analyze current retirement saving systems, compare and contrast the private retirement system with the social security program, and address the need for reform.

Karska heads the Department of Human Rights Protection and International Humanitarian Law and has held positions in important European and international institutions focused on human rights. After hearing from Jefferson, Karska provided an international and United Nations (UN) perspective regarding human rights and pension/ social security systems. Karska noted that historically, the U.S. social security system was a subsidiary system in nature. She posited that the problem we face today has to do with the flexibility of the programs and their ability to adjust to the changing needs of those who rely on them. She added that contemporary international human rights standards require states to ensure an adequate standard of living at every stage of life. It is a consequence of the inherent and inalienable dignity of every human being. To conclude her comments, Karska asked Jefferson for a few additional thoughts on how social security systems can be developed to improve the level of protection for human rights and adequate financial situations for the elderly.

Following their remarks, both Jefferson and Karska responded to questions moderated by Professor Emerita Leah Wortham, Director of the American Law Program and the LL.M. Program at Catholic Law. The questions addressed topics that included policy makers’ understanding of the regressive nature of United States systems and the need for reform in the private retirement system, universal coverage and holes in the current public system, the potential impact a universal basic income system would have on retirement savings, and the value of discussing human rights and other law topics from an international/ comparative perspective.

Click here to learn more about the final event in this year’s series.