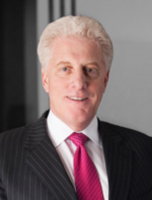 Four decades. That’s how long it has been since Patrick M. Regan ’80 began his relationship with Catholic Law. From student to active alumni to adjunct professor—he has shown his deep love and support for the Law School in an enumerate number of ways. As a recipient of the Columbus School of Law Distinguished Alumni Award, Regan—humbled by the celebration—reflected on his 40 years within the Law School community and the gifts they have shared with one another.

Regan thought about his time as a student and shared, “those were three formative years for me.” As a student, Regan made lasting friendships with his peers—noting fellow award recipient and classmate, J. Michael Hannon ’80. He found great mentors within the faculty. Two of them were participants in the 2020 Distinguished Alumni Award Ceremony—Professor Lou Barracato and award recipient, and former-adjunct professor Michael F. Curtin ’65. He also remembered his lasting relationships with Erv Panzer and the indomitable, late Ralph Rohner. He noted that all of them “really were great mentors.” Not only did they provide him with a first-rate legal education, but they prepared him for a distinguished legal career and lifetime of service.

As an alumnus of Catholic Law, Regan has undoubtedly had a distinguished career. Regan is President and Senior Partner of Regan Zambrini and Long and is one of the preeminent personal injury and medical malpractice attorneys in the Washington, D.C., area. Among his handling of many complex cases, Regan has extensive experience with cases involving Metro subway and Metro bus accident claims against Washington Metropolitan Area Transit Authority (WMATA). Of his work, Washingtonian Magazine once called Regan, “the Washington lawyer you call when you want to sue WMATA.” They added that he is a “personal injury lawyer who could be a poster boy for legal ethics and integrity.” And despite the high-profile nature of many of his cases, Regan is committed to providing each of his clients with personalized, caring service.

Outside of his work as a lawyer, Regan is generous with both his time and resources. He is supportive of numerous legal and charitable organizations, including his legal alma mater. As Dean Stephen C. Payne once said of Regan, he is “deeply engaged and supportive of the Law School.” Regan spends considerable time in the service of the school. Currently, he serves as a member of Catholic Law’s Board of Visitors. In this role, Regan helps to provide direction on how to strengthen teaching, scholarship, and service in the Law School. He also recently served on the Class of 1980 Reunion Committee, supporting the preparation of their Reunion Weekend in early October. Regan has also contributed to the community by previously serving as an Adjunct Professor. For years, between 1985 and 2000, Regan “ended up teaching an [Advanced Law and Procedure] course. He mused about the various buildings he taught in through the years—usually in a basement classroom—until the new Law School building was opened in 1994.

Regan is appreciative of the many years he’s been a part of the Catholic Law community; in all of the capacities, he has been able to contribute. He considered it a great honor to even be on the same program with others receiving recognition as 2020 Distinguished Alumni. Regan concluded, with a promise to continue to give back to the school that has given so much to him. “I look forward to—I’d like to say another 40 years, but that may be a bit aspirational.”