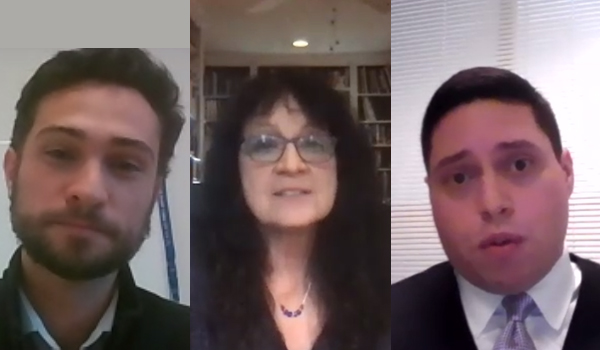 On October 29, 2020, Catholic Law hosted its first Hot Topics in the Law Roundtable Series of the academic year. This week, the student-led series, co-sponsored by the Office of the Dean of Students, and student chapters of the American Constitution Society and the Federalist Society, focused on a very timely topic: Supreme Court nominations and packing the court.

The discussion was moderated by Emmett Whelan (3L), who opened the hour by establishing group norms, noting that the program would be a discussion not a debate, and creating a safe space for all to participate and share their view. Whelan then introduced Catholic Law professors Sarah Duggin and Joel Alicea to share some background information regarding the form and function of the United States Supreme Court. Duggin presented a timeline outlining the history of the size of the Supreme Court, noting several years when the number of judges was greater or less than today’s nine. She also shared some fun Supreme Court Trivia, testing the group's knowledge of the Court. Alicea then spoke briefly on the topic of vacancies and new justices from the Court's perspective. He particularly touched on the functioning of the Court when there is a vacancy, the challenges confronting a new justice, and possible changes in doctrine with the recent swearing-in of Justice Barrett.

After the overview, Whelan proposed a series of questions for the group to discuss. The questions touched on a variety of topics. The group shared views on proposals for ways the Court may be changed, the current understanding of judicial ethics and nominees' lack of candor about substantive views, judges answering questions about their religious or organizational affiliations, and how to address vacancies in an election year.

As the hour drew to a close, Duggin spoke briefly about her relationship with the late Justice Ginsburg whom she first met while clerking for Judge Spottswood Robinson, the then Chief Judge of the D.C. Circuit Court and one of the four people who argued Brown v. The Board of Education. She shared, “They were two of the most gracious, amazing people I have ever met.” She continued, “They both prized civility and they thought it demeans them to treat their opponents in a way that was not civil, was not gracious—and that’s something I really took to heart.”