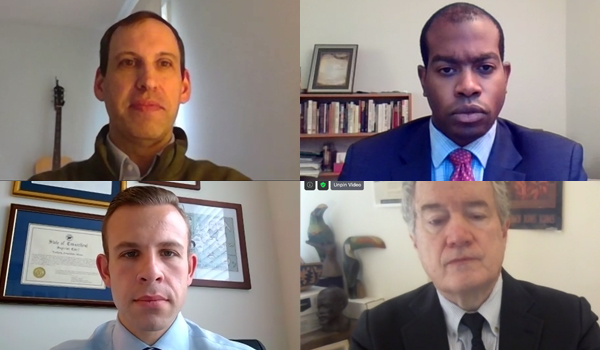 On October 27, 2020, the Center for Religious Liberty (the Center) at Catholic Law presented a virtual discussion of “Religious Liberty at the Supreme Court.” The discussion was aimed to provide an overview of the Supreme Court cases in the last term as well as to look at what is already on the docket for the current term and what might come up in the future. Catholic Law Professor Mark Rienzi, Director of the Center and President of Becket Fund, began by welcoming the group before turning the conversation over to the Center Co-Director, William Saunders.

Saunders acted as the moderator of the discussion, first introducing the guests for the discussion. Rienzi was joined as a panelist by Louis Brown, Catholic Law Lecturer and Executive Director of the Christ Medicus Foundation, and William Haun ’12, Counsel at Becket. Saunders asked each of the panelists to explain a few of the most recent Supreme Court cases in a term that Rienzi described as a “blockbuster term for religious liberty.” Panelists then took turns highlighting important points in key cases. In the second half of the discussion, panelists used their experiences to speak generally about upcoming cases.

The panel discussion concluded with questions taken from the audience. Saunders started the Q & A portion with questions related to the recent confirmation of Supreme Court Justice Amy Coney Barret and religious liberty issues arising out of the pandemic.