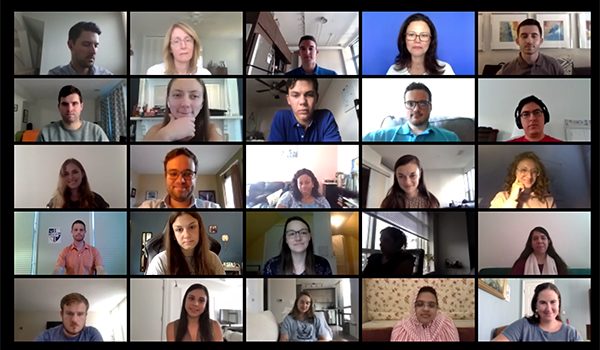 On August 20, 2020, for the seventh year in a row, students entering their first year at Catholic Law were asked to recognize their future role as lawyers and public citizens by reciting the induction pledge.

During a live-streamed event, Assistant Dean for Student Affairs and Dean of Students Katherine Crowley took the opportunity to once again welcome the new class of law students to the Catholic Law family. Then Dean Stephen C. Payne introduced the Honorable Lawrence M. Lawson ’72, former Assignment Judge of the Monmouth Vicinage and of the State of New Jersey and current Of Counsel for McElroy, Deutsch, Mulvaney, & Carpenter, LLP, to administer the oath. 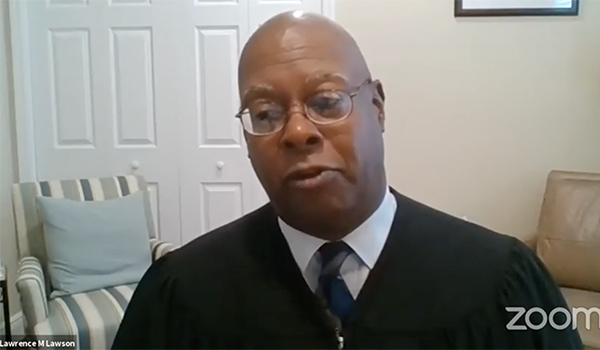 Judge Lawson was the first African American law secretary to work for the late Judge Thomas L. Yaccarino of New Jersey. Following the clerkship, Judge Lawson opened his own law firm and worked in private practice until 1987, during which time he served as the Municipal Prosecutor for the City of Asbury Park from 1981 to 1986, and was Mayor of Neptune Township from 1984 to 1986.

He was appointed as a Superior Court Judge of Monmouth County in 1987 and was assigned to the Civil Division. In March of that year, he was designated as the Presiding Judge of the Criminal Division where he remained until returning to the Civil Divison. In 1993 he was appointed as the first African American judge to become the Assignment Judge of the Monmouth Vicinage and of the State of New Jersey. He remained as Assignment Judge until he retired in 2014. Now at McElroy, Deutsch, Mulvaney, & Carpenter, Judge Lawson is Chair of the Firm's Diversity & Inclusion Committee and he focuses his practice on Mediation and Arbitration matters.

Judge Lawson has enjoyed a distinguished legal career since graduating from the Columbus School of Law and the Law School was honored to have him preside over the induction ceremony. Judge Lawson asked the students to repeat after him as he recited these words:

"I, [name], do solemnly swear or affirm that to the best of my ability I will be professional and ethical in all that I do as a member of the community at the Columbus School of Law; I will treat all persons whom I encounter with fairness, integrity, and civility; and I will strive to use my knowledge and skills to advance society, improve the quality of justice, and increase access to justice for all."

Catholic Law prides itself on its collegial and compassionate community. Despite being conducted virtually for the first time, the induction ceremony acts as a reminder of that. The support students receive from the Catholic Law community, and their family and friends is key to their success.