A Gentleman and A Scholar: Remembering Ralph J. Rohner '63 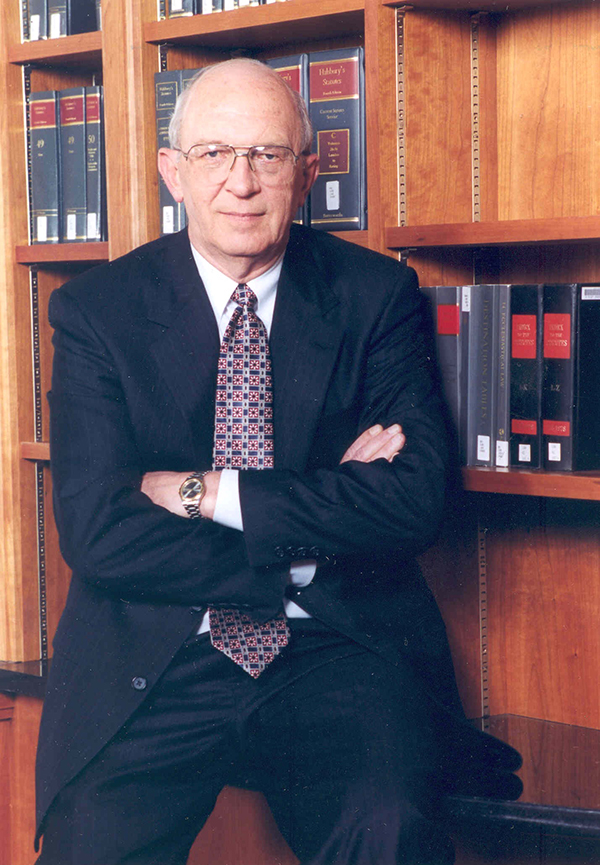 The phrase a gentleman and a scholar is part of the English lexicon often used to recognize someone who is admirable or held in high esteem. To say that Ralph J. Rohner was a gentleman and a scholar is not hyperbolic. It’s not the empty use of a tired idiom. The statement has been said by many, with the utmost sincerity, when describing Rohner and the legacy he has left behind. As a former colleague, Michael Cozzillio ’73 put it, “In a world where the term ‘gentleman and scholar’ is often tossed about somewhat cavalierly, Ralph not only epitomized it, he defined it. Few individuals have ever equally distinguished themselves as both outstanding human beings and brilliant academicians.” It is from this place of high esteem and loving memory that we pay tribute to Ralph Rohner—honoring the impact he had on the Columbus School of Law, on the legal world, and on all who knew him.

Rohner was a self-proclaimed “lifer” of Catholic University. He stepped onto the Catholic University campus in the Northeast quadrant of D.C. as an undergraduate and he never really left. Catholic Law Professor Emeritus Leah Wortham shared, “Ralph was dedicated to CUA since he came as an undergraduate in 1956 and he stayed on for law school.” Rohner graduated from his undergraduate studies in 1960 with an Artium Baccalaureus (A.B.) in Philosophy; earning the distinction for his demonstration of proficiency in Latin, Greek, and German. He chose to stay at Catholic to pursue his Juris Doctor (J.D.) from the Law School. In his three years as a student at Catholic Law, Rohner set himself apart—both in the classroom and out. Rohner was a winner of the 1962 Sutherland Moot Court Competition, editor-in-chief of the Catholic University Law Review Volume 12, and valedictorian of the Class of 1963. He was also an exceptional friend. Classmate Dena Feeney ’63 remembers Rohner as her ally, “I arrived in August 1960 to find myself not only the sole female in my law school class, but also the only female in the school. I needed a protector and helper. Ralph was it—sometimes behind the scenes and sometimes openly [...] Ralph was a real friend and a gentleman in the true sense of those words.”

While Rohner did leave Washington, D.C., for a year to teach legal writing at Stanford University, he was quickly lured back east. At the request of then Dean Vernon Miller, Rohner began teaching Commercial Transactions at Catholic Law in the fall of 1964. Rohner believed in the immense power and privilege of teaching at an institution like Catholic Law. In a 2018 interview, he noted, “Catholic Law is a teaching institution, and if you are not joyful to teach or engage the students, then you are in the wrong business.” Nessa Feddis ’83, a former student of Rohner’s, remembers Rohner’s almost effortless teaching abilities, she shared, “one of my most vivid images of him is as a clear and patient professor, whether teaching students, practicing lawyers, or Congress itself. He was always ready to help [...] nudging one, not on what to think, but how to think.” In his tenure at the Law School, which included 48 years on the teaching faculty, Rohner held a myriad of positions—excelling in all of them and approaching each with the care and consideration they deserved. Professor Emeritus George Smith notes, “Ralph’s work ethic as a scholar, teacher, and dean was hard to match.”

In addition to teaching, Rohner spent 22 years as the faculty advisor for the Catholic University Law Review. When the Law Review celebrated its 50th anniversary, Rohner published a history of the publication, noting in particular, the importance of students running law reviews. It’s an unusual model when compared to other professional journals, but with students at the helm, they develop a sound judgment that sustains them through their careers. When the editorial board of the 50th-anniversary edition dedicated the issue to Rohner, they shared, “Through Professor Rohner’s guidance, wisdom, and vision, the Law Review has continued to foster quality academic discussion and reflection with the same spirit and values characterized by its very first issues. Professor Rohner, perhaps more than any other single person, is responsible for making Catholic University Law Review the success that it is today.”

Rohner was briefly acting Dean from 1968 - 1969, later serving as Dean of the Law School from 1987-1995. Those nine years of his tenure are marked by monumental achievements. Fraternity brother and friend, Lawrence Radanovic ’63, spoke about Rohner as dean during the establishment of the Krakow program, “of course, we know of Ralph’s contributions to the ‘sister’ law school in Krakow, Poland.” As the Iron Curtain fell, western universities began to develop cooperative learning arrangements with Central and Eastern European universities. Catholic Law, with Rohner and Professor Rett Ludwikowski, determined to do so as well and the Law School became the first university from the United States to develop a program in Eastern Europe after the fall of the Iron Curtain. The program was established in 1991 and welcomed its first class of American and Polish students in the summer of 1992. Catholic Law partnered with the Jagiellonian University in Krakow—regarded as one of the finest institutions in Eastern Europe. The program was seen as an important step in building the strength of the Comparative and International Law program and brought together Polish and American students to study and learn from one another.

The Law School building stands as a daily, visual reminder of the impact Rohner had on the school while dean. Rohner oversaw the design and construction of the building which was completed in 1994. Joan Vorrasi shared, “The ‘new building’ became a reality because he made it happen [...] No one could tell Ralph Rohner ‘no’ when he came calling for help. He didn’t ‘spin’ the message, he reminded alums how much Catholic University Law School did for them and let them know he, and the Law School, needed their help.” Through his tireless efforts, he left the school more beautiful than he found it. In honor of his extraordinary dedication to the Law School, the fourth floor of the building bears his name, “The Ralph J. Rohner Faculty Floor,” shining like a beacon over all who enter the school.

Beyond the walls of the Law School, Rohner had an impact on Capitol Hill. After writing a letter to the Federal Trade Commission, Rohner was contacted by Senator William Proxmire to speak on behalf of consumers for a proposed bill; the bill was later enacted. During a sabbatical year from 1975-76, Rohner served as staff counsel to the Consumer Affairs Subcommittee for the U.S. Senate Banking Committee. As special counsel, he worked with Senator Proxmire and Senator Joseph Biden on several reports to congress including an amendment to the Equal Credit Opportunity Act of 1976 and the Consumer Leasing Act of 1976. He even found himself in the Rose Garden with President Gerald Ford when he signed the amendment of the Equal Credit Opportunity Act. After that year, Rohner became a consultant for the Federal Reserve Board and spent 25 years as counsel to the Consumer Bankers Association (CBA).

Rohner was a pillar in the field of consumer law. A co-author of a law school casebook on consumer law and editor/co-author of a treatise on Truth-in-Lending law, Rohner is remembered by co-author Dee Pridgen as a “pioneering scholar.” He wrote and lectured extensively on the federal and state consumer credit laws. Rohner was a member of the American Law Institute, of the American Bar Association Business Law Section and its Committees on the Uniform Commercial Code and on Consumer Financial Services. Rohner was also a founding member and past president of the American College of Consumer Financial Services Lawyers.

Rohner was dedicated to generations of lawyers and dedicated five decades to the law school. When he was honored with a Lifetime Achievement Award in 2011, it was just one small way the Law School community could show its deep appreciation to the man who had given so much to the school. At the award ceremony, then Dean Veryl Miles ’80 thanked Rohner “for not only acting on our behalf, but for dreaming on our behalf.” Nearly a decade later, Miles added that she “will always treasure the gift of [Rohner’s] wonderful life.”

Many have shared about how impactful Rohner was both to the school as well as to them personally. As former student, employee, and colleague, Georgia Niedzielko ’81 put it, “Many people have talked about how much he loved the Law School. He loved the institution, but he loved all the people, students, staff, faculty, and alumni much more.” Long-time staff member and friend Jean Emery shared, “It has been an honor and privilege to know Ralph both professionally and personally. From my first day working at the Law School, everyone spoke so fondly of Mr. CUA. Ralph was a great mentor to me, and I learned so much from him. Ralph was such a kind person and he truly touched the lives of everyone around him. I am so grateful I could call him and Monica friends.” Another long-time friend and colleague Lou Barracato ’65 added, “The best decision I ever made at that time, and for the remainder of my professional and personal life, was to keep him in my sights and do my best to live my life ‘just like Ralph.’ He was my mentor, my tutor, my colleague, my Dean, and, most importantly, my friend [...] My life has been enriched because I knew Ralph. My life has been fulfilling because he was my friend.”

Rohner has left behind a family he was equally devoted to—his wife Monica, their four children, and ten grandchildren. Barracato shared, “For 56 years he was a loving husband. His four children had a doting father who talked proudly about them. His ten grandchildren will miss him greatly.” Professor Emeritus Ellen Scully remembered, “Ralph shared his family in so many ways.” Monica worked as Director of the Alumni Office for 20 years and their partnership helped build the school. Rohner was a renaissance man and a truly influential individual. While his loss is monumental, we are thankful for the vision that he shared with us all.

Many have shared their memories and lent their voices in paying tribute to Rohner and his remarkable life. Click here to view the full remarks that have been shared. There is also a form on the page to allow for others to share their memories of Rohner.

Click here to view an interview that was conducted in December of 2018 after Ralph had received the 2018 William Callyhan Robinson Award. 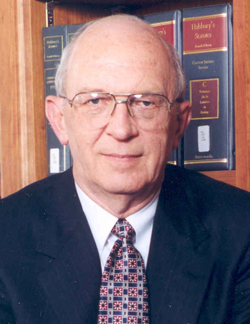 Many have shared their memories and lent their voices in paying tribute to Rohner and his remarkable life. Click here to view the full remarks that have been shared. There is also a form on the page to allow for others to share their memories of Rohner.

Click here to view an interview that was conducted in December of 2018 after Ralph had received the 2018 William Callyhan Robinson Award.