Catholic Law Welcomes Guests to Opening of “Lawyers Without Rights: Jewish Lawyers in Germany under the Third Reich” 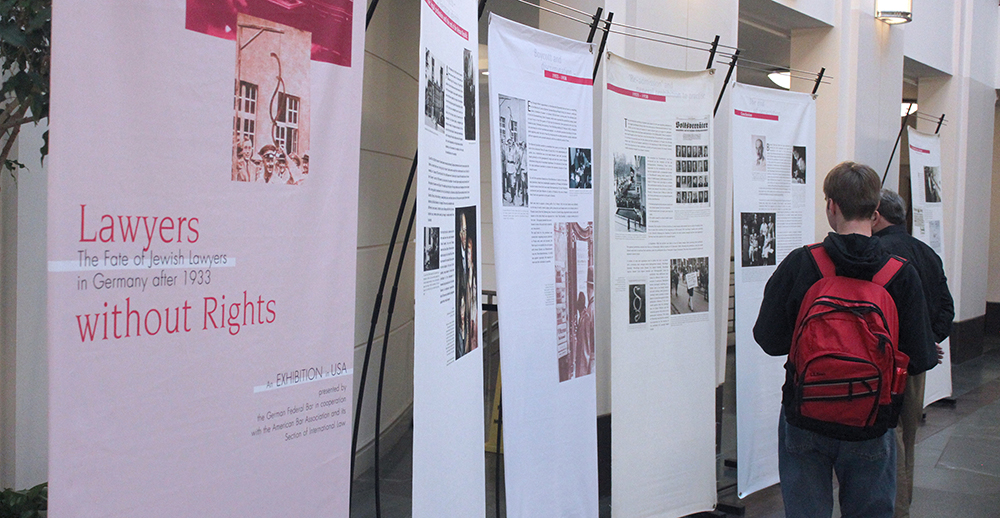 On February 10, 2020, Catholic Law welcomed students, alumni, faculty, staff, and honored guests to the opening of the highly acclaimed international exhibit, Lawyers Without Rights: Jewish Lawyers in Germany under the Third Reich, commemorating the 75th Anniversary of the liberation of the Nazi Death Camps.

Dean Stephen C. Payne opened the program by taking the opportunity to first and foremost thank the co-sponsors of the event: The American Bar Association (ABA) for lending us the exhibit, the German Federal Bar for their partnership with the ABA, and the Embassy of the Federal Republic of Germany for sponsoring the afternoon’s reception. Dean Payne also recognized Professor Cliff Fishman, who was in attendance, for his willigness to share what being a jewish professor at a Catholic university has meant to him. Dean Payne then welcomed John Garvey, President of the Catholic University of America. President Garvey also welcomed the numerous guests in attendance. He then spoke briefly about the law enacted under the Third Reich that made it possible for the destruction of the legal system and the collapse of the Rule of Law.

Judy Perry Martinez, President of the ABA, then took the floor to speak about the profound importance of the exhibit. She shared what an honor it is for the ABA to be the North American steward of the exhibit as well as to have the exhibit on display at a catholic university for the first time. The exhibit is a reminder of how the Nazi regime undermined the Rule of Law and also that lawyers and judges to this day serve on the front lines of protecting the democratic system.

Following President Martinez, there was a special interlude; a musical performance of music composed at the Terezin concentration camp in 1943. Professor Murry Sidlin, Professor of Performance and the Arts of the Holocaust Era, first explained the historical context of music and the art that emerged from the Death Camps—representing a response to the worst of mankind, with the best of mankind. Professor Sidlin then welcomed Professor Sharon Christman and Dr. Ivo Kalchev to perform two pieces from the camps. The first was a piece representing a broken heart, the second a piece representing hope.

After this moving interlude, The Honorable Ricklef Beutin, Deputy Chief of Mission at the Embassy of the Federal Republic of Germany in Washington, reflected on ensuring that new generations will remember the abhorrent crimes inflicted by the Nazi Regime. That in finding new forms of remembrance, one must retrace the long paths that lead to the gates of Auschwitz. The exhibit documents the injustice done to the Rule of Law and the injustice done to humanity, and its message has not gone out of date. 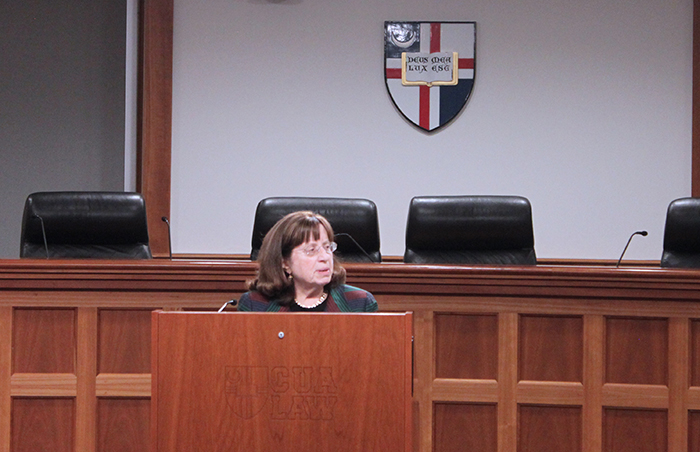 The final guest speaker of the day was the Honorable Marian Blank Horn of the U.S. Court of Federal Claims. She spoke from a deeply personal place as her Father was one of the judges in Berlin to lose his place on the bench under the Third Reich. Judge Horn has used lessons from her family to shape her whole career and to continue the tradition of the Rule of Law in a safe place, for the future.

Dean Payne concluded the program by once again thanking guests, with special thanks to Professor Marshall Breger whose efforts were essential in bringing the exhibit to Catholic Law. Dean Payne then invited everyone to join together in the Keelty Atrium for refreshments and to enjoy the exhibit.

Lawyers Without Rights: Jewish Lawyers in Germany under the Third Reich will be available for viewing in the Louise H. and James Keelty, Jr. Atrium Tuesday, February 11 through Thursday March 5, 2020.