The Military and National Security Law Students Association and the Institute for Policy Research hosted "The Practice of Law in the Gray Area of Covert Action" on February 7, 2019. The event included three former General Counsel's to the CIA John A. Rizzo, Robert Eatinger, and Robert Monahan and was moderated by CUA Law Professor Antonio F. Perez. The panelists spoke about their experiences in the CIA, challenges with covert action, the impact of real life events on the CIA, their roles within the CIA, and what it takes to be a good lawyer.

"The event was a great success. The panelists have tremendous experience and wisdom that they shared with the group," said Erin Luibrand (2L) said.

John A. Rizzo, a Boston native, was a lawyer at the Central Intelligence Agency for 34 years. Over his long CIA career, he served in a myriad of responsible positions, with significant focus on the Agency's clandestine intelligence collection and covert action programs. Most notably, he twice served as Acting General Counsel, his tenure totaling more than seven years, during the period from 2001 until his retirement in 2009. In 2014, Mr. Rizzo authored Company Man, a memoir of his career published by Simon and Schuster. In recent years, he has been interviewed by numerous media outlets, including CNN, FOX News, and the LA Times, the latter describing him as "the most influential career lawyer in CIA history." He presently serves as senior counsel at a Washington, D.C. law firm.

Robert Eatinger has a combined 31 years experience practicing national security and intelligence law as a lawyer in the Central Intelligence Agency and U.S. Navy. He retired from the CIA in 2015 as the Senior Deputy General Counsel. Mr. Eatinger also held the following senior positions at CIA: Acting General Counsel, Deputy General Counsel for Operations, chief counsel for the CIA Counterterrorism Center, and Chief of CIA's Litigation Division. Prior to joining the CIA in 1991, Mr. Eatinger was a judge advocate in the U.S. Navy. Mr. Eatinger retired from the U.S. Navy in February 2013 as a Captain with a combined 30 years of active duty and reserve service, which included an active duty tour in the National Security Agency's Office of General Counsel, and one active duty and three reserve tours with the component in the Navy's Office of the Judge Advocate General that specialized in intelligence law and national security litigation. Mr. Eatinger has received, among other awards, the CIA Distinguished Career Intelligence Medal and the Intelligence Community Legal Award for Lifetime Achievement. Currently, he is a Partner and head of the national security law practice at Dunlap, Bennett & Ludwig, PLLC.

Robert Monahan is a former naval officer who served successively as a surface warfare office and as a judge advocate until retirement in the grade of Commander in 1995, upon which he was employed in the CIA Office of General Counsel (OGC) where he retired in 2016. Mr. Monahan's Navy assignments included a tour as Director of the Judge Advocate General's Office of Special Programs that, among other things, supported the intelligence and SPECOPS communities and advised on the conduct of classified litigations and other national security-related matters. At CIA, Mr. Monahan served in various capacities, including Chief Legal Advisor for the Office of Security from 2013 to 2016 and Deputy Chief of the Legal Office in the CIA Counterterrorism Center from 2003 to 2008. He received, among other awards, the CTC Bush Award in 2008 and the CIA Career Intelligence Medal in 2017.

After the program students had the opportunity to speak with the panelists at a reception. 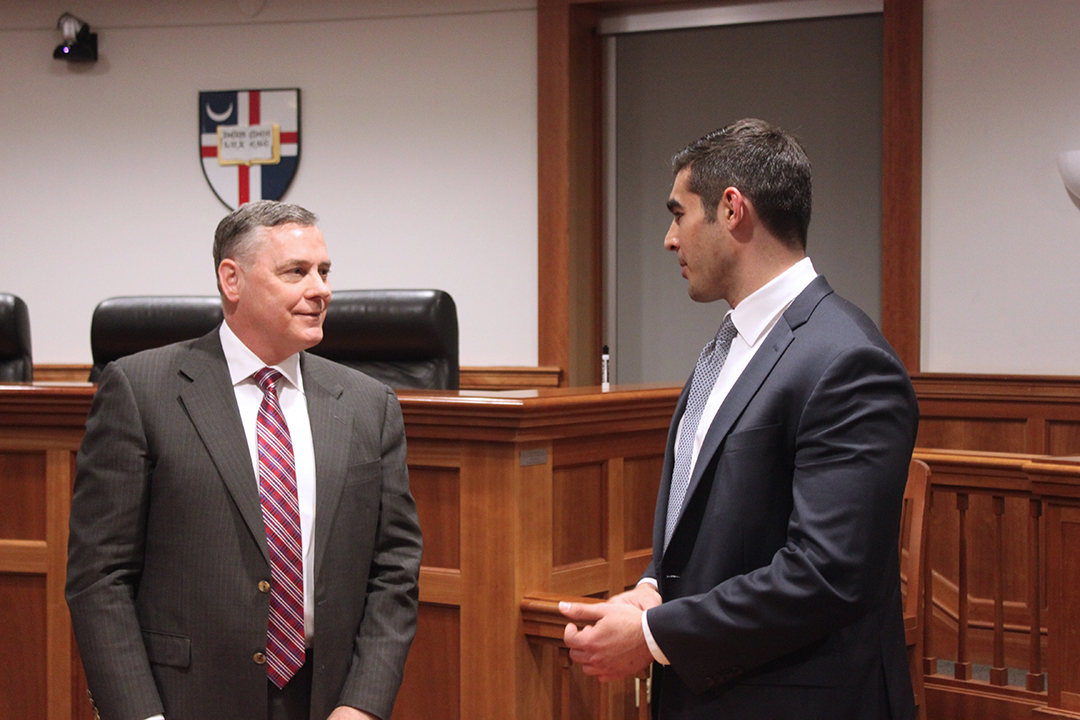 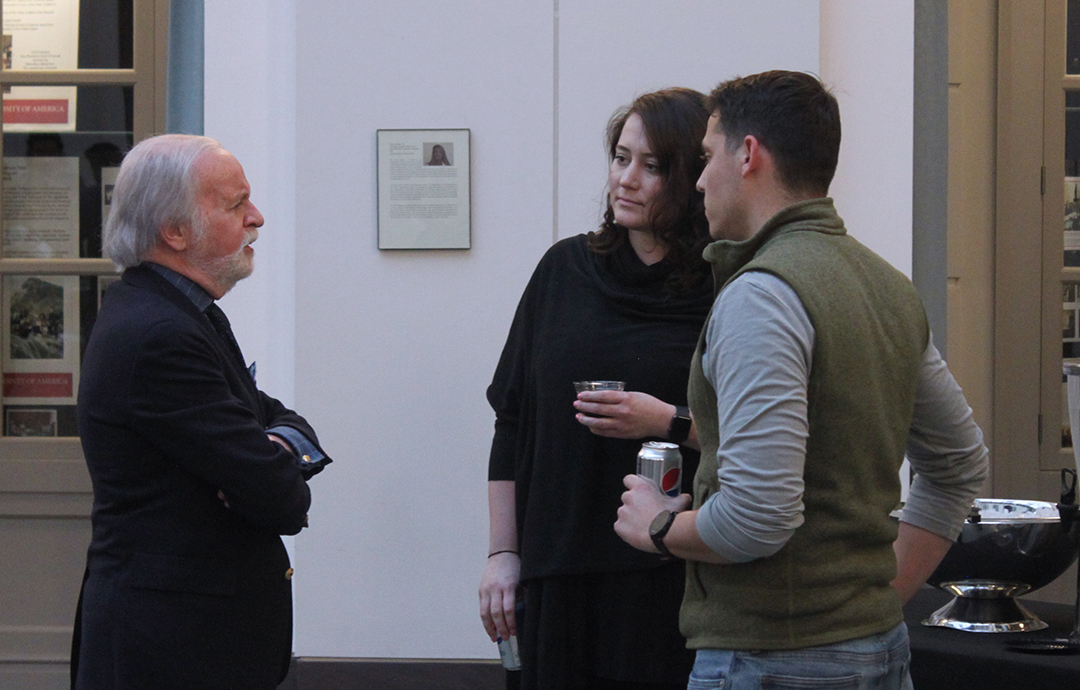 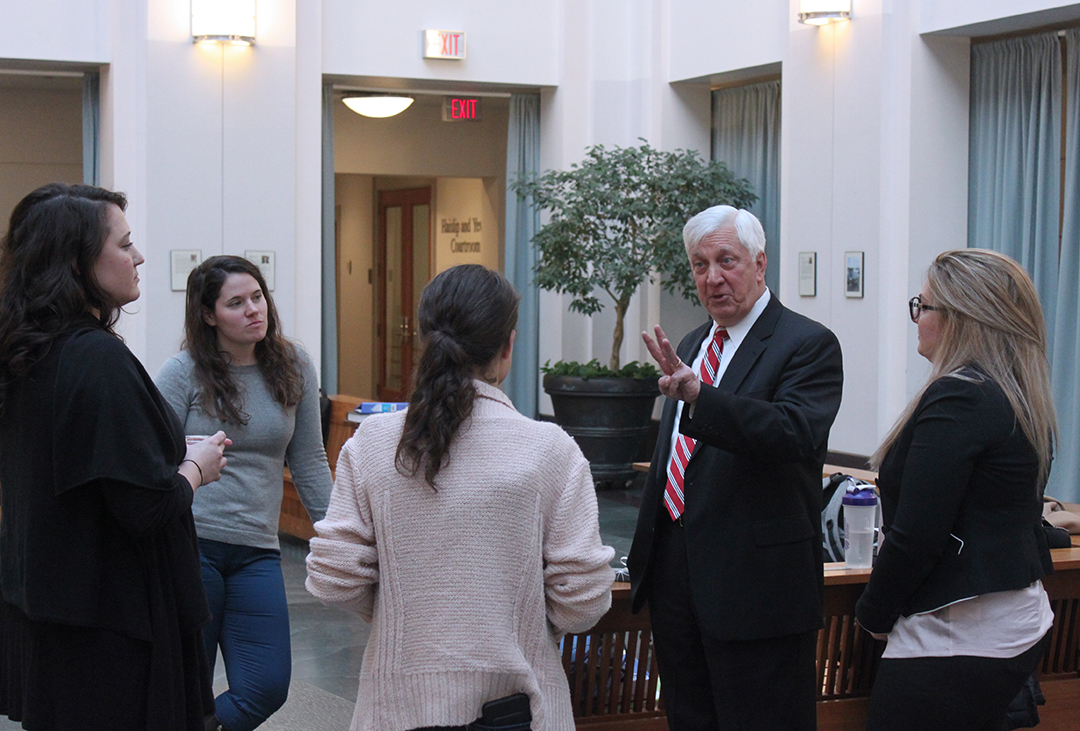