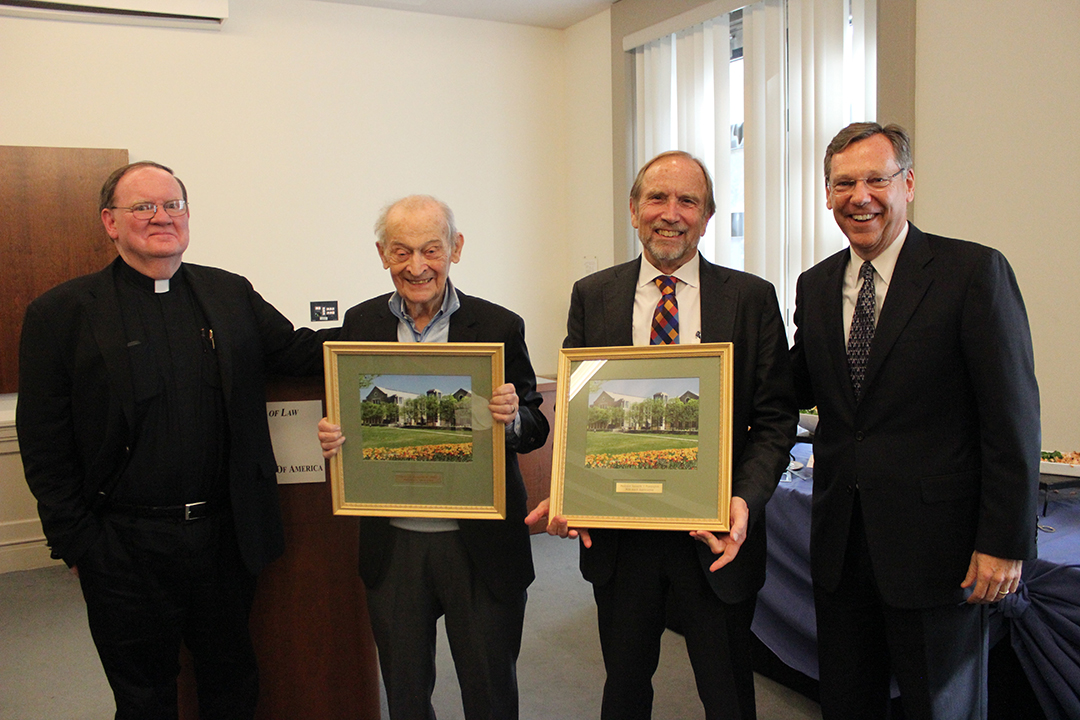 Retiring CUA Law Professors Kenneth Pennington and Benjamin Mintz were honored during a faculty luncheon on November 11, 2016. CUA Law Dean and Knights of Columbus Professor of Law Daniel F. Attridge spoke briefly at the event, thanking the faculty members for their services and providing remarks about Professor Mintz.

"Professor Mintz retired in August 2016 after 32 years of distinguished service to the Law School, for which we are immensely grateful," Attridge said.

"A graduate of the Columbia Law School, he served as a U.S. government attorney for more than 20 years, completing his government service as chief attorney of the Occupational Safety and Health Division of the U.S. Department of Labor during the first decade of the OSHA program's existence. He joined our law school faculty in 1984. He has taught many difference courses here including: administrative law, employment law, election law, labor, legislation, safety and health law, Jewish law, and torts."

"Dr. Pennington has been an esteemed member of the University community since moving to D.C. in the fall 2001," Kaslyn said.

"Pennington has contributed significantly to medieval legal history. He holds the Kelly-Quinn Chair of Ecclesiastical and Legal History in the Columbus School of Law and The School of Religious Studies. His areas of interest are ancient, medieval, and early modern legal history, the history of constitutional thought, political theory, church history, history of universities, and paleography."

Pennington thanked the audience for their attendance. "These past 15 years have been by far the best years of my life. All of you can take credit for that. I have enjoyed teaching here better than I would at any other University in the United States," Pennington said.

Mintz and Pennington were both presented with a framed picture of the Law School.