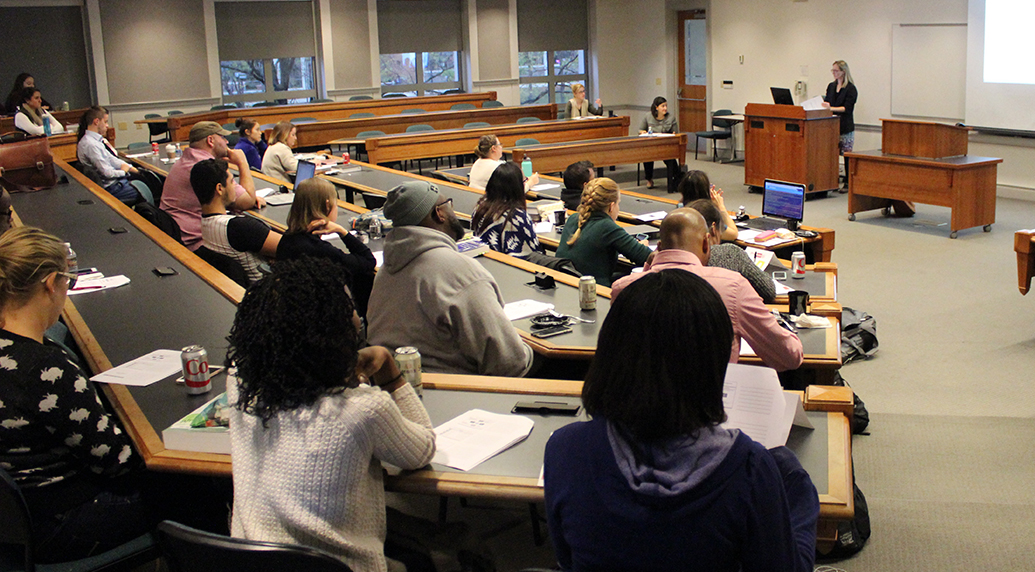 On October 26, 2016, Kids In Need Of Defense (KIND) visited The Catholic University of America Columbus School of Law to conduct a training session for students interested in pro bono opportunities with the organization. The training was hosted by the CUA Law Pro Bono Program and close to thirty students attended the event.

Over 150,000 unaccompanied children have arrived in the United States in the last three years. They are fleeing violence from which their countries cannot protect them. Most unaccompanied children come from Honduras, El Salvador, and Guatemala. Fifty percent of children arriving in the U.S. have no one to represent them in immigration court, and children without representation are five times more likely to be deported back to danger.

KIND provides lawyers to represent the unaccompanied children in their deportation proceedings, provides protection, advocates for policies that protect the rights of these children, and helps children reintegrate safely in their countries if they are not able to stay in the U.S.

Students interested in volunteering or interning with KIND would have the opportunity to conduct intake interviews and phone calls with clients and adult sponsors. They would also be able to practice their legal writing skills by drafting case referrals memos, assisting with motions, affidavits, briefs, and memoranda of law. Students would also participate in researching, information gathering, and interpreting.

Throughout the training, students were taught an overview of juvenile immigration and the process of exploring options in the court for unaccompanied children such as: special immigration juvenile status (SIJS), asylum, T visa, and U visa.

Current 2L, Kate Heise, got the opportunity to work on a pro bono project with KIND. The individual in the case was seeking asylum in the United States as they feared returning to El Salvador where they had received gang threats. This month, Kate received the wonderful news that the individual was granted asylum.

The Pro Bono Program at CUA Law is a voluntary one and every year students chose to take the pro bono pledge to assist those in need of access to justice. Volunteering with KIND is just one of the ways students can honor their pledge. Any interested students who missed the training should contact Aoife Delargy at delargy@law.edu.