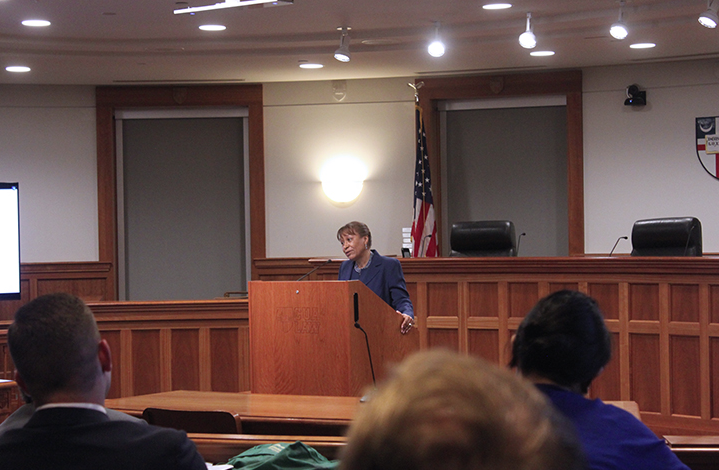 On the evening of March 16, 2016, students, alumni, faculty, staff, and guests gathered at the Columbus School of Law for the 34th annual Brendan F. Brown Lecture Series, entitled "The Need for 'Honest Faith in a Higher Law.'"

The audience was welcomed with opening remarks from CUA Law Dean Daniel F. Attridge, who introduced the Honorable Janice Rogers Brown, federal judge on the United States Court of Appeals for the District of Columbia Circuit. Dean Attridge noted that Judge Brown received an honorary law degree from CUA Law in 2003. "Judge Brown was praised not simply because she was already regarded as a highly influential and well-spoken jurist, but also because she had great influence in how she helped her neighbor through her Church community," Attridge read. 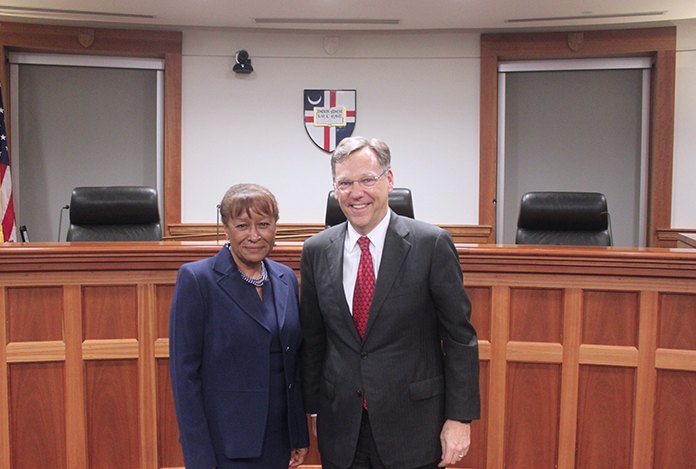 Judge Brown began her address by speaking about the lecture series' namesake, Brendan F. Brown, the sixth dean of CUA Law. She remarked on his academic achievements and his time serving as a judicial consultant to the chief of prosecution of the International Military Tribunal for the Far East War Crimes trial in Tokyo. "He was an unabashed natural lawyer in a time before naturalism fell entirely out of favor. The positive law did not condemn aggressive war, but both in Tokyo and Nuremberg, there were lawyers and judges prepared to say a higher law had been violated," she said.

During her 30-minute lecture, Judge Brown discussed why the United States, as a nation, lacks the civilizational competence of earlier eras and questioned whether freedom can flourish in an age of uncertainty. "We are so immersed in our culture, so insensibly responsive to the spirit of our own times, that we neither perceive the way it unconsciously shapes our attitudes and own beliefs nor have the ability to gain an objective perceptive," she said.

Judge Brown continued to expand on the need for higher law in today's high stake world of terrorism and asymmetrical warfare. "In our time, we have no less need for faith in higher law than Dean Brown and his contemporaries had in the wake of World War II. A belief in higher law enabled the Allied Forces to bring to justice those responsible for engulfing much of the world in war," she said. 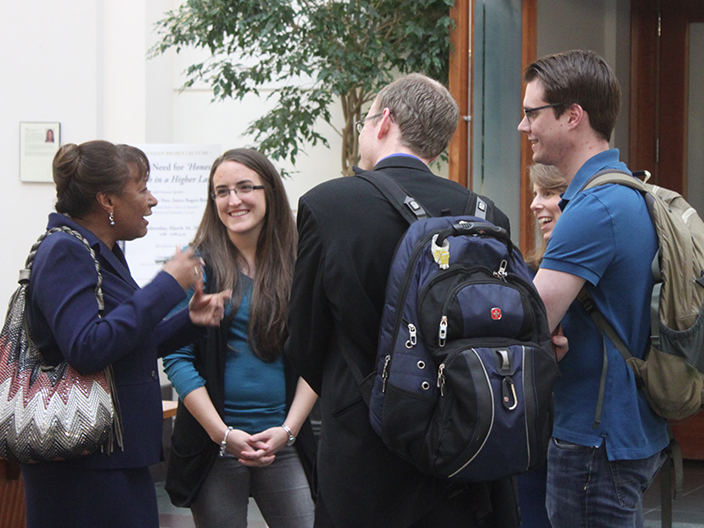 Before she took questions from the audience, Judge Brown closed the lecture by echoing Dean Brown's call to revive a faith in a higher law. "Dean Brown met the challenges of his time with dignity and sacrifice," she said. "To the students and practitioners among us, we need more Brendan Browns. We need scholars and lawyers capable of ably interpreting positive law, but understanding and giving life to that higher law."

Judge Brown also offered a piece of practical yet sage advice to lawyers in training - "seek to live a life that is meaningful to you, and let that include your work."

After the conclusion of the lecture, students, alumni, faculty, staff, and guests were invited to a reception in the Keelty Atrium for a chance to speak with Judge Brown.