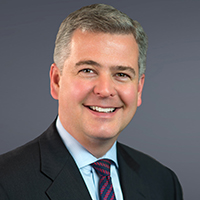 Dan Gallagher, Class of 1999, Former Commissioner of the U.S. Securities and Exchange Commission, has been named President of Patomak Global Partners, LLC. Potomak Global Partners is a financial services consulting firm that provides strategic regulatory advice, with offices in Washington and New York.

Before being named SEC Commissioner in 2011, Gallagher performed several roles with the SEC, including staff member, Deputy Director and Co-Acting Director of the Division of Trading and Markets. As Commissioner, Gallagher focused on initiatives aimed at strengthening the capital markets and encouraging small business capital formation, including staunchly supporting the changes introduced by the JOBS Act. Prior to his role with the SEC, Gallagher was a partner with WilmerHale and General Counsel of Fiserv Securities.

To read the January 4, 2016 press release regarding Gallagher's new position, please click here.
Share this:
Back to Top