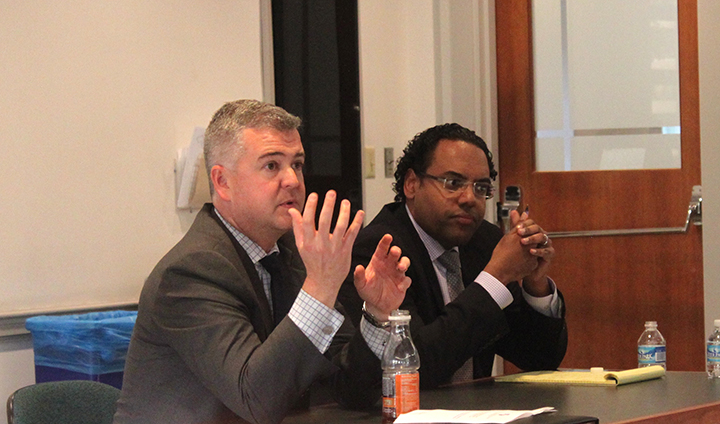 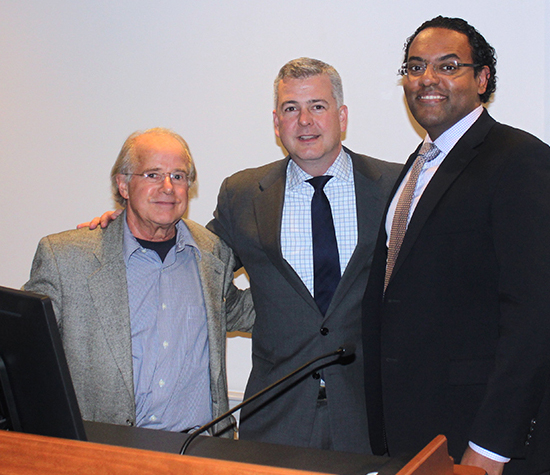 A high stakes issue currently confronting the securities industry as well as government regulators is what role shareholder activists should play in motivating corporate governing bodies in creating and distributing corporate wealth.

Two distinguished commenters in this debate - Sabastian V. Niles, counsel at the New York mergers and acquisitions firm, Wachtell, Lipton, Rosen & Katz, and Dan Gallagher, '99, (now former) Commissioner of the Securities Exchange Commission - shared their views on this thought provoking issue at the second of this Fall's "Dan Gallagher Lecture Series," sponsored by The Securities Law Program and held on Wednesday, October 14th.

What places this issue in the forefront of securities industry matters today is the rise in influence of shareholder activists after the great recession of 2007-2009. From 2010 to 2013, the number of major American corporations that alter their financial operations due to shareholder activism grew by 88 percent. The average market capitalization of target companies went from $3.9 billion to $8.2 billion from 2011 to 2012.

Sabastian Niles asked how should companies be encouraged to deploy this increased wealth: should it be compensation to shareholders through return of capital? Reinvestment in the business, capital projects and research & development? Growth through mergers and acquisitions? Compensation to employees or to fund employee training? Perhaps more importantly, what, if anything, are the roles of the board, shareholders, other stakeholders and the government in this process. Should attempts be made to encourage the long-term and sustainable increase in profitability of these firms and relieve companies of pressures they face to manage for the short-term and prioritize maximizing their current stock price?

These and other questions sparked a lively discussion among the speakers and members of in the audience.

The third and final lecture in this series, "Should Corporate General Counsels be Responsible for Compliance Failures" will be held on November 4th at 5:00 pm in the Slowinski Courtroom. Speakers will include Dick Walker, General Counsel of Deutsche Bank and Rick Ketchum, CEO of FINRA.