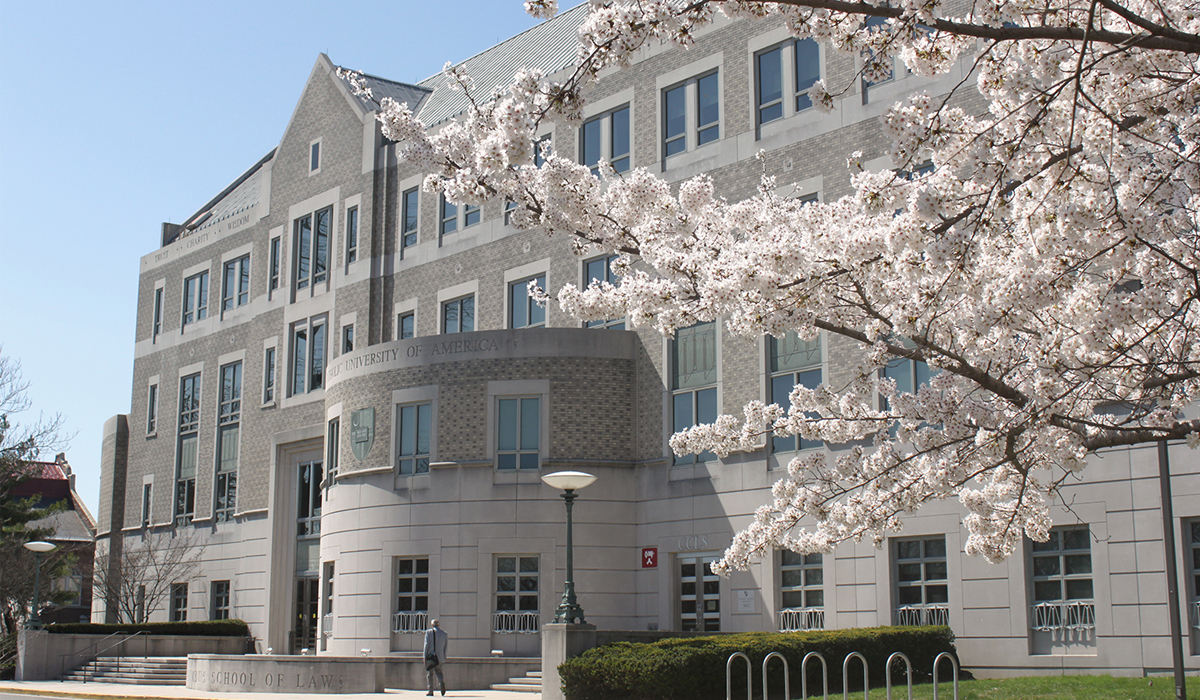 We would like to hear about your recent achievements -- please send your updates by filling out the alumni information updates form or email us at cualawalumni@law.edu.

This edition of Class Notes was started in May 2021. Clicking on any of the years listed below will take you directly to listings for that year.

1982
Eric P. Bernard was nominated for the New Hampshire Workers' Compensation Appeals Board by Governor Christopher Sununu and confirmed by the Executive Council on February 3, 2021.

David L. Winstead, a member of Ballard Spahr’s Real Estate Department, was elected to the board of the National Federal Development Association (NFDA). NFDA is a national association of private property owners and service providers who lease or provide service to government tenants.

1979
Stephen M. Silvestri has been recognized in the 2021 edition of Chambers USA: America’s Leading Lawyers for Business, a prestigious annual guide ranking the leading law firms and attorneys in the U.S. Silvestri is a principal in the Baltimore, Maryland, office of Jackson Lewis P.C. He has nearly 30 years of experience representing companies, public sector employers, and institutions of higher learning in complex labor disputes, and has acted as their chief spokesperson and bargaining strategist in negotiations throughout the country.

1988
Mark Holden, board chairman of Americans for Prosperity, was quoted by Deseret News after participating in a Hatch Foundation webinar entitled, "Justice and Mercy: Bringing Greater Balance to America's Legal System."

1990
Minnie Baylor-Henry was appointed to the Board of Directors of Paratek Pharmaceuticals, Inc. The company announced the appointment on June 14, 2021.

Jeffrey S. Chiesa, Criminal Defense at Chiesa Shahinian & Giantomasi, recently featured as one of 25 CSG attorneys in Morris/Essex Health & Life Magazine’s "Top Lawyers" in its June/July 2021 issue. More than 5,500 attorneys throughout New Jersey's Morris and Essex counties were asked to select colleagues who they consider the best within their practice area and whom they would seek out for legal needs.

1992
Michael A. Refolo, of Shrewsbury, a partner at Mirick O'Connell, was named the Best Lawyers® 2022 Business Organizations "Lawyer of the Year" in Worcester. Additionally, he was recently selected by his peers for inclusion in The Best Lawyers in America© (2022 Edition) in the same field. Refolo’s practice focuses on business law, including securities, mergers and acquisitions, banking, and the drafting and review of business contracts. He represents companies in all stages, from emerging and developing companies to family-owned businesses to publicly held companies, both as general counsel and in specialized transactions.

1993
Amy Conway-Hatcher was profiled by the Women’s Bar Association of the District of Columbia in their #MeetAMemberWednesday series on July 28, 2021. A partner at Schertler & Onorato, LLP, and founding member of Chief—a private network built to drive more women into leadership positions and keep them there—Conway-Hatcher is also the author of the upcoming book, Turning Point.

Terria Jenkins has joined Bond, Schoeneck & King in the firm’s Rochester office. Jenkins is senior counsel and part of its intellectual property practice.

1995
Todd H. Gazda has been named the new executive director for the Collaborative for Educational Services in Northampton, Massachusetts. He will begin in the position effective July 1, 2021.

2002
Hope Jarkowski, Head of Equities at the New York Stock Exchange (NYSE), was the keynote speaker at an event held to celebrate the launch of 100 Women in Finance NextGen Washington, D.C., a peer network of 100WF members in the first decade of their finance careers.

2003
Megan Stull has been named to a one-year term as President of the Federal Communications Bar Association effective July 1, 2021.

2005
Jessica A. Springsteen made partner at the firm Clifford Chance US LLP. Springsteen is a member of the Americas Energy and Infrastructure Group.

Craig Trainor, a member of the Catholic Law Alumni Council, has been appointed the Director of Judicial Education at the Law &amp; Economics Center (“LEC”) of the Antonin Scalia Law School at George Mason University. In this role, Trainor will lead LEC’s flagship Judicial Education Program, which educates and trains American federal and state court judges in basic economics, accounting, statistics, regulatory analysis, and the principles necessary to maintain the rule of law, economic freedom, and constitutional limits on governmental authority.

Craig Trainor, a member of the Catholic Law Alumni Council, had his law journal article, "In the Rush to Reform, Prudence Is Among the Highest Duties: How to Responsibly Reform Cash Bail," published by The Federalist Society Review. The article contends that we can address the growing demand for criminal justice reform on pretrial detention by eliminating cash bail but must do so prudently—that is, with the elimination of cash bail, we must also permit judges to detain criminal defendants pretrial who threaten public safety.

Craig Trainor, a member of the Catholic Law Alumni Council, submitted written testimony at the request of the U.S. Commission on Civil Rights on the subject of responsible reform of cash bail for the Commission's February 26, 2021, public hearing entitled, "The Civil Rights Implications of Cash Bail."

2006
Nicole Angarella was among six individuals nominated by President Biden on July 30, 2021, to fill key roles. Angarella is nominated for Inspector General of the United States Agency for International Development.

2011
William H. McDermott was sworn in as an Immigration Judge for the Executive Office for Immigration Review on May 6, 2021. In this role, he will preside in formal judicial proceedings and make decisions that are final unless formally appealed.

2013
Madeline Taylor Diaz and Katherine Soltis co-authored an article, “Ganged Up On: How the US immigration system penalises and fails to protect Central American minors who are trafficked for criminal activity by gangs,” which was published in Anti-Trafficking Review on April 29, 2021.

Stephanie M. Brochert was chosen by Michigan Lawyers Weekly as a 2021 Up & Coming Lawyer. Brochert is a member of Plunkett Cooney’s Insurance Law Practice Group and a Catholic Law Alumni Council member.

2016
Carl “CJ” Hobbs appeared on Fox 5 on Monday, June 21, 2021. Hobbs spoke with Kevin McCarthy about one of his biggest passions—boating.

2017
Anthony Jones and his wife, Ambika Natesh, are happy to announce the birth of their son, Ashwin, on August 9, 2021.

2018
Sydny Bryan joined WhitbeckBennett as an Associate Attorney in May 2021.

Katherine “Kate” Almen was profiled in the American Bar Association (ABA) Member Spotlight released on May 18, 2021. An associate attorney at Eisenstein Malanchuk LLP, Almen focuses on issues related to state and environmental law—with a particular focus on environmental insurance recovery. Previously, Almen clerked at the Environmental Council of the States and at the U.S. Environmental Protection Agency, Office of Civil Enforcement, Water Enforcement Division. During her time at Catholic Law, Almen served as President of the Law School’s Environmental Law Society.