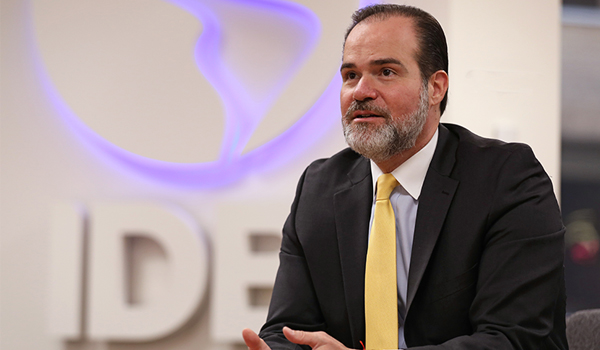 “I am the embodiment of my life experiences. My father was an immigrant and my mother a refugee. They taught me the value of hard work and perseverance. I learned from watching them. I pray I can pass that on to my kids.” Mauricio Claver-Carone ’00 currently serves as President of the Inter-American Development Bank (IDB) where he chairs the Board of Executive Directors of IDB Invest and the Donors Committee of IDB Labs. He has earned this position through hard work and determination throughout his career. After being named the inaugural recipient of the Latin American Law Students Association (LALSA) “Professional Achievement” Award, Claver-Carone reflected on the importance of continually developing one’s skillsets and always being open to opportunities as they come.

Claver-Carone was born in Miami, Florida, but spent most of his childhood in Madrid, Spain, before returning to Florida (this time Orlando) for high school. With a father from Spain and a mother from Cuba, Claver-Carone grew up in what he described as “a typical Cuban household.” While his mother always wanted him to become a lawyer, Claver-Carone didn’t immediately take to that career path. He admitted, “I resisted for as long as I could, but then began naturally to develop an interest in public policy.”

One college experience, in particular, helped to cultivate his interest. As a “proud Floridian,” Claver-Carone attended Rollins College in Winter Park, northeast of Orlando. Claver-Carone was interested in becoming a professor until an internship opportunity changed his trajectory. Claver-Carone shared, “An internship with the Congressional Hispanic Caucus increased my interest in law and politics, which led me to become a lawyer.” With this new path in mind, Claver-Carone began looking for the right law school to fit his needs. Claver-Carone set his sights on Washington, D.C., to be close to the nation’s policy and legal epicenter. He was also acutely aware that he wanted to be more than just another face on an overcrowded campus. Catholic Law’s proximity to the capital but also its small community feel made Claver-Carone feel right at home. He reflected, “I wanted to be seen as a person and not simply as a statistic. I had a wonderful experience at Rollins College, where my professors became my friends and cared about me personally. I felt that same compassion at Catholic Law.”

The connections Claver-Carone made during law school extended far beyond his time at Catholic Law. As he navigated the early years of his career, Claver-Carone was welcomed back to campus by former-dean Bill Fox—this time, as a member of the faculty. In 2001, the Law School was making a concerted effort to bring in practitioners with different backgrounds to teach and during that time, Claver-Carone taught Lawyering Skills I to first-year students. Looking back on the experience, he shared, “I had students write their memos on the criminal case against Panamanian dictator Manuel Antonio Noriega. Not too many first-years can say they did that. It was great fun.”

Not only did the opportunity to teach help to satiate Claver-Carone’s old desire to become a professor, but it also reflected the openness with which he has navigated his career. When explaining how he has determined his career path, Claver-Carone put it simply, “By following the doors that opened.” He continued, “I have been a banking lawyer, professor, human rights advocate, national security official, international finance representative, radio host, entrepreneur, and now the head of a multilateral development organization.” Claver-Carone’s flexibility to try new things and ability to find success within each of them have been common themes throughout his life—enhanced by his hard work and fortitude in the face of new challenges. He noted, “Throughout my career, I have continuously developed skill sets that have helped me succeed at each level, and most importantly I have pursued a path that allowed me to do work that I believe in.”

Of course, it was difficult stepping into his new position at the IDB in the midst of a global pandemic, but it was exactly his belief in the work that made the transition worth it. Claver-Carone shared, “I love being President of the Inter-American Development Bank (IDB), as I get to focus morning, day, and night, on how to help people in Latin America and the Caribbean take steps to have a better life. We are working to digitize schools and health systems, empower female entrepreneurs, help create quality jobs, and prepare communities for climate resilience, to name a few examples.” While working remotely has made the start of his new job feel “different,” Claver-Carone has made a point to interact with as many of his new colleagues as possible, given the circumstances. He further explained, “I can’t help but imagine what our offices look and feel like when they are full of people doing their best work to help improve lives in the region. I am constantly reminded as I walk the hallways of our headquarters in Washington, D.C. of the unique and diverse staff here at the IDB, and how everyone has continued working in the face of this challenging time to help make sure we make the most of the region’s potential.”

Given the incredible amount of time and dedication he gives to his work, Claver-Carone considers it equally important to give time and dedication to his life outside of work too. He explained, “When I’m with my two wonderful kids, I put my phone down. Quality time must be precisely that, with undivided attention.” When asked if he has any advice for the next generation of lawyers, Claver-Carone concluded, “Don’t have preconceptions of what you want your career to look like. Look at every job as an opportunity and work hard to excel, regardless of what level. Someone will take notice.”